Posted on December 4, 2012 by Simon Richardson 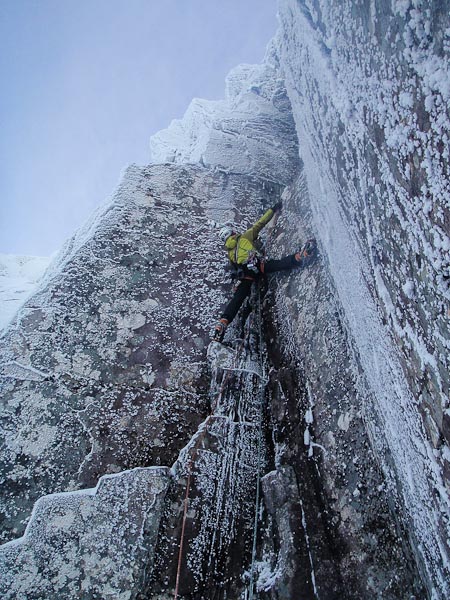 Guy Steven bridging wide up the niche on the second pitch of The Survivor (VII,8) on Ben Nevis. The crux section lies ahead and entails moving up the left wall to gain the ledge on the left arête. (Photo Keith Ball)

On Sunday December 2, Guy Steven, Keith Ball and Ewan Rodgers (third time in crampons!) made the second ascent of The Survivor on Ben Nevis. Guy described it as “a fantastic route – we really had to stretch the legs!”

The Survivor is based on the prominent niche on the front face of Number Three Gully Buttress. Given it is such a prominent feature, it was added relatively late in the development of modern mixed climbing on the Ben. When Iain Small and I climbed it in March 2008 we called it The Survivor because it had ‘survived’ without a first ascent for so long!