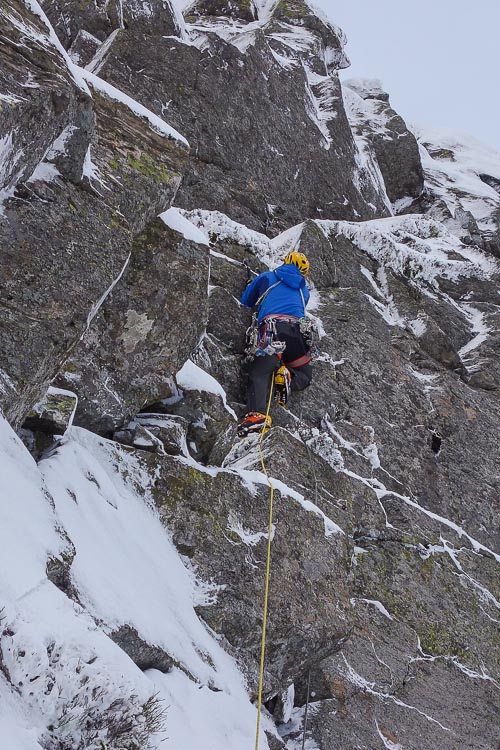 Adrian Crofton about to ‘bamboozled’ on the first ascent of Bamboozle Buttress (V,6) in Corrie Bonhard. The route eventually went up and left. (Photo Simon Richardson)

On January 16, Adrian Crofton and I visited Corrie Bonhard in Glen Clova and climbed Bamboozle Buttress (V,6), a direct line up the left-hand of the twin buttresses high up in the corrie. The right-hand buttress was climbed last year by two good routes – Mystery Ramp (III,4) and Cryptic Wall (V,6) – and the left-hand buttress did not disappoint with sustained mixed climbing from the first move to the very top.

Adrian was very much ‘bamboozled’ on the second pitch, because the line was not obvious, but after two false starts he found a hidden shelf that deftly led through the headwall to easier ground.

The low-lying south-easterly aspect of the crag means that these are very much mid-winter routes that can only be climbed after a hard freeze, heavy snowfall and when the sun is low in the sky. Added to this, Corrie Bonhard (together with several other Glen Clova cliffs such as Winter Corrie, Coire Fee, Juangorge and Craig Maud) sometimes carries a bird restriction from February 1 to July 31.