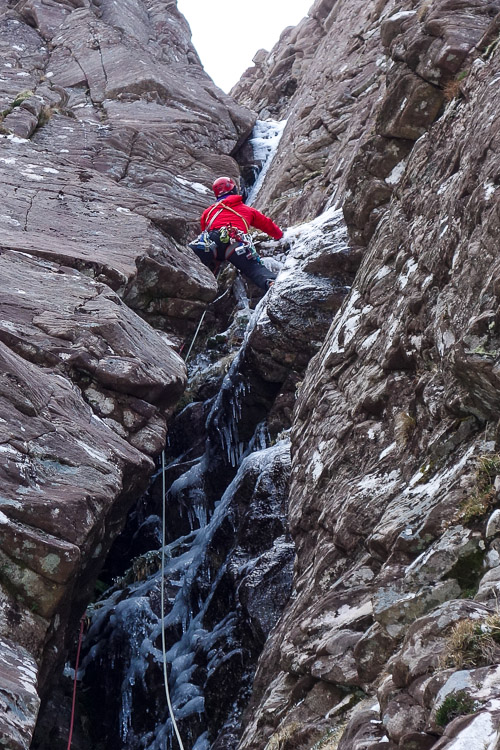 Helen Rennard on the first winter ascent of Buffalo Ballet on Creag nan Calman on Cul Mor. This Scottish VS was first climbed by R.Gatehouse and C.Smith in July 1979 and was the first recorded climb on the mountain. (Photo Simon Richardson)

On the evening of January 21, Helen Rennard and I were on our way to Skye when we received a phone call from Mike Lates suggesting that we may want to reconsider because the Cuillin had been thawing all day. A quick look at the weather forecast suggested it would be clearer and colder up north, so we changed direction for Ullapool.

With our plans in a certain amount of disarray, we decided to take advantage of the cold weather, throw the dice, and attempt the first winter ascent of Buffalo Ballet in the Creag nan Calman on the south side of Cul Mor. I doubt this crag had ever been visited by winter climbers before and as we approached under the frozen black cliffs it looked as if our gamble had come to nought. Our hearts leapt when we rounded a bulging prow and the chimney-line of Buffalo Ballet came into view with a line of ice running from top to bottom.

Inevitably the route wasn’t as straightforward as it looked, and 12 hours later we topped out after five long and absorbing pitches. Over half that time was spent wresting with the 15m-high crux section that eventually demanded a point of aid. The memory of the long descent in the burning light of a full moon with the Northern Lights glowing behind us will remain with us for a long time, and capped a memorable adventure in the Scottish hills.