Posted on December 14, 2015 by Simon Richardson 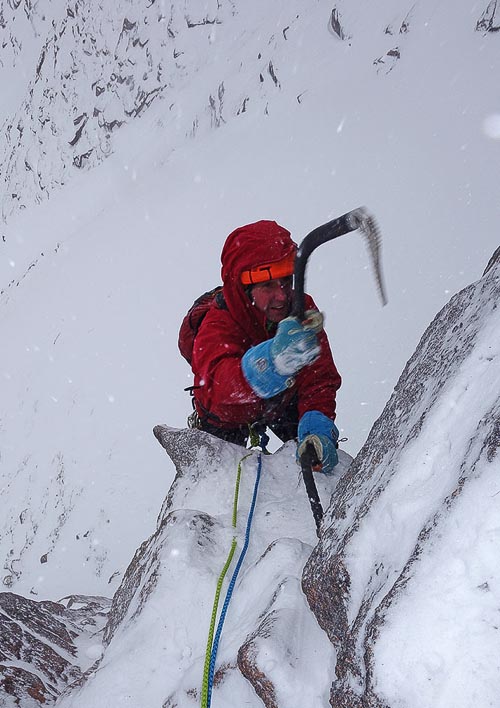 Dave Almond seconding the first pitch of Swallow Tail Pillar (VII,8) in Coire on Lochain on Cairn Gorm. This route, which lies between Deep Throat and Gaffer’s Groove, was first climbed in winter by M.Walker, A.Gilmore and R.Rosedale in March 2008. The first pitch is shared with the winter version of Gaffer’s Groove. (Photo Ian Parnell)

A succession of storms and deep thaws has contributed to a slow start to the winter season. At the end of last week, the temperatures cooled bringing a welcome snowfall. Ian Parnell and Dave Almond were quick on the scene and after a fruitless trip to the Ben on Thursday December 10, they visited the Northern Corries and made the likely third ascent of Swallow Tail Pillar (VII,8) on December 11. Despite the low temperatures and snowy weather, climbing conditions were a little disappointing as Ian explains:

“It was extremely bare in the Corries. Whilst the snow level on Thursday and Friday was down to 500m, and the temperature was around -3 deg C at 1100m, there was almost nothing building up on steep rock itself. It was snowing and hailing with strong gusts, but it seemed that the snow had been squashed into cracks. Easier angled routes were catching snow, and as a result as one of the few slabs climbed by a harder route (Swallow Tail Pillar) was the only thing of that grade that seemed to be in condition to us. It saved the trip!

Dave led the second crux pitch, which we both thought very delicate, thin and surprisingly bold. I noticed that Andy Inglis [who made the second ascent with Guy Robertson in April 2012] wrote on the UKC logbooks ‘2nd ascent? Lead P2…. technical and sketchy… once the route was excavated from under the 12″ of hoar! Felt like VIII,8 on the day (full grade harder than Bulgy).’”