Posted on December 4, 2015 by Simon Richardson 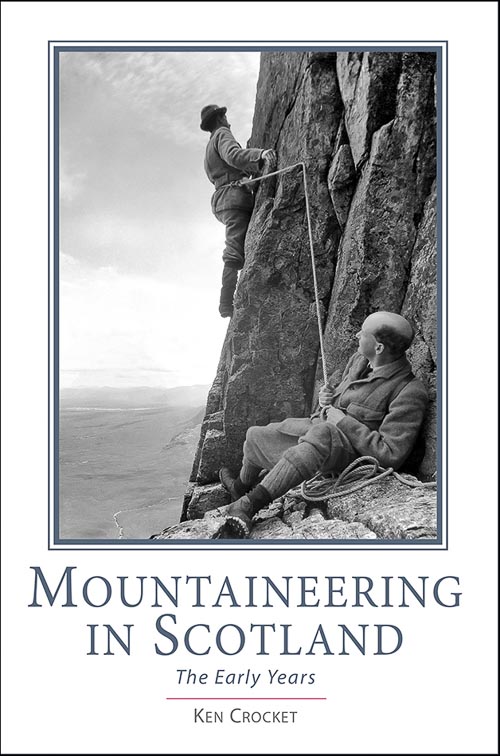 Mountaineering in Scotland – The Early Years by Ken Crocket was published by the Scottish Mountaineering Trust in July. The cover photo shows W.A. Morrison on the crux of Crowberry Ridge Direct on Buachaille Etive Mor in July 1905. First climbed by the Abraham bothers in 1900, this route was years ahead of its time. Morrison did not succeed on this occasion. (Photo A.E.Robertson)

Mountaineering in Scotland – The Early Years is a comprehensive history of Scottish mountaineering from the earliest days through to the outbreak of the First World War. The story really begins in the 1880s with the formation of the first Scottish climbing clubs. Although mountaineering was highly developed in the Alps by this time (the first ascent of the Matterhorn in 1865 is considered the peak of the Golden Age of Alpinism), climbing in the harder-to-access Highlands had yet to take off. The pace of development in Scotland over the ensuing three decades was extraordinary and Ken Crocket has done a masterful job in weaving together a myriad of material to recount one of the most important eras in our mountaineering history.

In his foreword, Robin Campbell explains that The Early Years is not the first history about Scottish climbing. Indeed the book is part of a Scottish Mountaineering Trust series that includes Greg Strange’s The Cairngorms (2010), Helen Steven’s Rising to the Challenge (2010) and Ken’s own Ben Nevis – Britain’s Highest Mountain (1986 and 2009). We also have Ben Humble’s classic Cuillin of Skye (1952), but what sets this book apart is that it describes the development of climbing and mountaineering across the country as a whole rather than one particular region. For whilst Ben Nevis and Skye were focal points – due in part to new railway lines – there was active exploration and development by the Victorians across the entire Highlands from Arrochar in the Southern Highlands through to the Far North-West.

This weighty 350-page book is a handsome volume that contains so much information that it is impossible to absorb it all on a first reading. Not only will you find the background behind many of the greats of Scottish mountaineering – Naismith, Raeburn, Collie etc. but also the stories behind many of their climbs from Tower Ridge to Crowberry Gully and The Black Shoot to Hayfork Gully.

From a modern Scottish winter perspective, the technical standards of the Victorian mountaineers were breath taking. Raeburn’s first ascent of Green Gully (IV,3) on Ben Nevis in 1906 is well known but how about Arrow Chimney (IV – Tarmachan  – 1898), Pygmy Ridge (IV,5 – Cairn Gorm – 1904), Gendarme Ridge (IV,4 – Stob Ban – 1904) and the likely first ascent of False Rumour Gully (Dorain – IV,4) way back in 1903? These routes were years ahead of their time and only received their contemporary grades some 80 years after they were first climbed.

In my view Mountaineering in Scotland – The Early Years enhances the enjoyment of climbing in Scotland in both summer and winter. Understanding more about the people who pioneered the classic routes and the circumstances behind their ascents cannot fail to add an extra dimension to your own experience. Ken Crocket should be commended for his research, scholarship and clear writing style and has made a notable addition to Scottish mountaineering literature with this landmark book.

Simon Richardson is a passionate Scottish winter climber
View all posts by Simon Richardson →
This entry was posted in Book Reviews and tagged Ken Crocket, Robin Campbell. Bookmark the permalink.

2 Responses to Book Review – Mountaineering in Scotland – The Early Years