Posted on December 16, 2015 by Simon Richardson 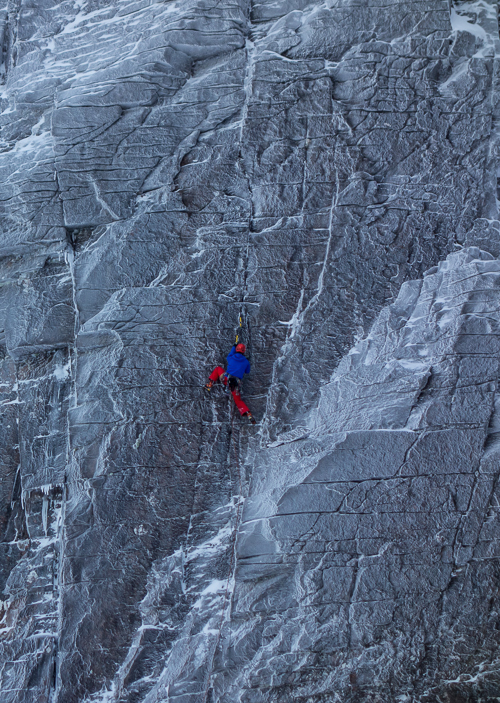 Andy Inglis styling up the third ascent of Pfugga-lule (VIII,9) on the impressive Happy Tyroleans wall on No. 3 Buttress in Coire an Lochain. This superb shot was taken by Dave Riley during an ascent of Savage Slit. (Photo Dave Riley).

On Saturday December 12, Andy Inglis and Neil Adams made the third ascent of one of the Northern Corries modern test–pieces when they climbed Pfugga-lule (VIII,9) in Coire an Lochain.

“It’s a route that has interested Neil and I for a few years,” Andy told me.  “Having seen the questionable first ascent and climbed a fair bit in the corrie and we knew the route climbs a very steep wall (overhanging), which equally inspired us and filled us with apprehension. This part of No.3 Buttress is somewhat less reliably in condition than other parts of the corrie, so it was something of a surprise to find it in hoared up nick on Saturday. Unfortunately our attempt at the first non-wad (after Charly/Matthias and Greg Boswell) ascent was flawed with me taking a fall onto my leash a move before sanctuary due to a combination of pump and creating a complex mess of leash/rope/gear tangle… early season blues! The route is generally well-protected, technical, pretty physical and well worth doing (in better style than us!).”

Andy refers to a ‘questionable first ascent’ because Austrians Charly Fritzer and Matthias Wurzer’s first climbed Pfugga-lule on almost dry snowless rock in January 2012. When they heard feedback that these conditions were not acceptable, they returned and reclimbed the route in bona fide winter conditions after it had snowed a few days later. Charly then led the route several times for the camera, but I was unable to secure a photo for www.scottishwinter.com at the time. Copyright for these images rested with his sponsor, and it proved too difficult to obtain one.