Posted on December 17, 2015 by Simon Richardson 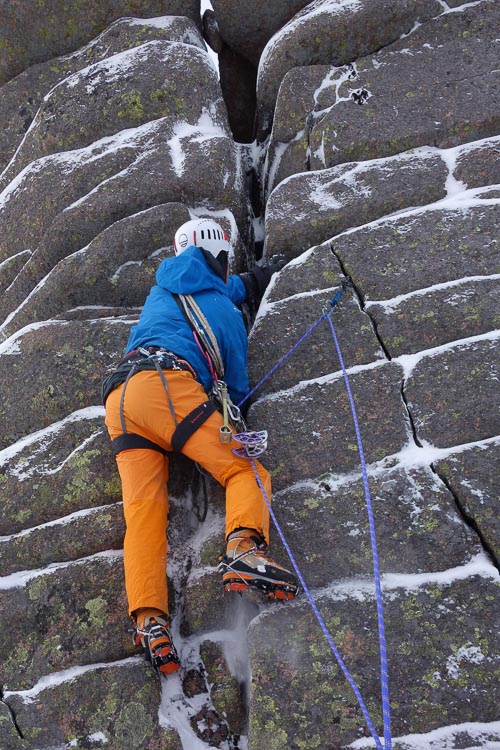 Roger Webb tackling the final pitch of Anvil Chorus (IV,7) on Creagan Cha-no. The recalcitrant chockstone can be seen winking above his head. (Photo Simon Richardson)

Sunday December 13 was a beautiful day in the Cairngorms. I’ve been feeling lousy with a persistent cold for the past three weeks but the good weather forecast tempted me out with Roger Webb for a short day on Creagan Cha-no on Cairn Gorm. By the time we arrived at the top of the crag, two teams were already in action, and throughout the day the popular routes saw multiple ascents. Johannes Felter and Ruth Love set the pace with ascents of Chimney Rib, Jenga Buttress, Anvil Gully and Fingers and Thumbs – a productive day!

Roger and I had our sights set on the wide crack system on the left wall of Anvil Gully. Roger led up the left branch of the gully (which is often climbed as an easier start to the original route that takes the steeper right leg), and belayed below vertical twin cracks on the left wall. As the invalid I’d chosen this pitch as I thought it would be the easier option, but I soon found myself wrestling with an awkward bulging offwidth. Eventually sense prevailed, I investigated the left wall and found a couple of hidden hooks, and two steep pulls later I was in the upper slot that led over a bulge to a large platform below the steep headwall. I then made myself comfortable at the belay, quite happy with my lead of the Tech 6 pitch.

The headwall is cut by two offwidth cracks. Sandy Simpson and I climbed the left-hand one when we made the first ascent of Flaked Out on our first ever visit to the crag. I remember Sandy bounding up the pitch in five minutes or so, which is just as well as it was getting dark. Today’s objective was the right crack, which was clearly steeper and capped by an overhang, but suitably prepared we had brought a rack of large cams. As Roger started up it was clear that the wall was even steeper than it looked and the lower section was surprisingly technical. Roger made steady progress, but unfortunately the chockstone below the roof was awkward to reach, and after an hour of fighting he surrendered the lead after finally making the crucial thread.

We pulled the ropes through and I tied on to the sharp end. It hadn’t been my plan to do any difficult leading, but the shadows were starting to lengthen, and if we were going to get up the route it was now or never. Fortunately Roger had done all the hard work, and when I reached the chockstone I still had sufficient power in my arms to pull over the roof and make a long reach for a hook. Roger followed quickly and we joined a group of climbers who had just finished Chimney Rib and Anvil Gully and had been following our progress with interest.  After such a public display, Anvil Chorus seemed a suitable name, and we settled on a grade of IV,7 (Roger was in a devilish mood and wanted to rate it III,7), and we’ll leave it to the next party to make a smoother ascent.