“Lurcher’s Crag is Worked Out”

Posted on December 18, 2015 by Simon Richardson 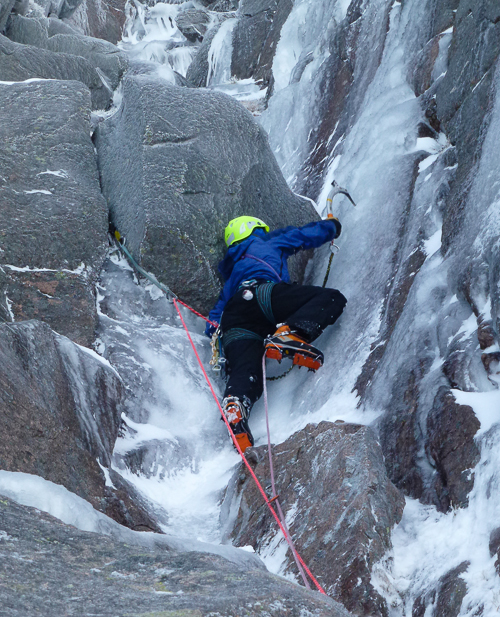 Steve Perry making the first ascent of Have an Ice Day (V,5) on Lurcher’s Crag on Cairn Gorm. This was the first of a fine triptych of routes added to the cliff in recent days. (Photo Andy Nisbet)

“I was accused of lying, but it just depends on your definition of what makes a route,” Andy Nisbet explained. “If you mean independent lines top to bottom, then it was worked out. But if you want to go there because it’s good early season and near the road for short days, then you can look at the pictures again and decide that good lines count after all, even if they do join established routes higher up.

It had only been cold for a couple of days and now the forecast for the weekend was good. Steve Perry and Sandy Allan were keen, so I asked them whether they wanted to gamble on Lurcher’s being frozen, or play safe and head for something rocky in Coire an Lochain. With a risk of overcrowding in Lochain, Lurcher’s was unanimous. On Wednesday that week, my exercise had been to look for a lost rope on the path to Coire an Lochain and reported on UKC, followed by a walk over to Lurcher’s to look for lines. There was no snow and no hint of it being frozen (and the rope is still somewhere in the boulders), but I managed to glimpse the top of a ramp inset into the side of St. Bernard’s Ridge, and see that it held some turf.

So on the Saturday [December 12] we headed straight for it, with a hope that its base could be accessed and that the turf might be frozen. Arriving underneath provided a great surprise. We knew the main grove left of the ridge was blocked by an overhanging step that we’d ruled out as impossible, but the groove was now full of ice and a streak ran down the sidewall past the overhang. It looked well climbable but we had blunt tools and crampons for mixed and no ice screws or hooks. Not enough to put off Steve, who immediately volunteered to lead.

The ice was still a little wet, so not too brittle, and the main problem was the lack of protection, a common problem in the main grooves on Lurcher’s. The top of the groove looked steep from below but turned out to be a kitten. The route finished up the upper part of St. Bernard’s Ridge. The name is maybe a bit naff, but unexpectedly we did “Have an Ice Day” at V,5.

The weather was great and a trail was broken, plus I’d noticed that the slabby start to the hanging ramp was well iced, so we had to go back the next day [December 13]. It was my turn to lead so I was fully psyched to have a hard time. But the ice turned out to be very good quality, although quite thin, so with sharp tools, I got a flying start to a steep groove which lead to the ramp. Halfway up the groove was a decision to stop and place a peg in a strenuous position or keep going. Once I’d stopped and placed it, I knew I’d made the right decision. The ramp was trickier than expected but I was on a roll. Sandy led a short pitch to the same upper section of St. Bernard’s Ridge and we were back at the car park before three. The others gave it a topical name The Force Awakens (VI,6).

The weather forecast had backed off from a deterioration, so it was back to Lurcher’s on Monday [December 14]; each day you spot more lines. The base of the Dotterel ridge is quite broad and featured another groove, although the undercut base had put us off. The only snag is that it had snowed 6 inches overnight in Aviemore and probably more on the hill. The ski road would be shut until they’d made it black enough for tourist cars with bald summer tyres, and with no rush until the Gondola opens at 10am, we knew to drink lots of tea, chat about the world in general and take head torches.

Eventually the road did open and we (I should say Steve and Jonathan Preston) ploughed a route to Lurcher’s while I followed a way behind. We made it to the crag by noon and hurried down to the start. Steve soon dispatched with the boulder problem start through the undercut base, then some precarious moves on slabs under deep powder led to a short steep groove. We were quickly learning that Lurcher’s is steeper than it looks and this vertical groove was overhanging. Getting on to the first step proved very awkward, a semi-mantel on to a sloping ledge, but the groove was capped by a wedged flake which provided an excellent hold to pull out of the top. The groove now curved left and back right, deeply covered in snow on smooth rock, but as Steve dug his way up, good cracks continued to appear and after a long pitch, he reached easier ground which led on to the main Dotterel ridge.

I’d forgotten how good the climbing was on Dotterel, and despite all the clearing, two long pitches led to the top It was all a bit of a mad rush as the light was dimming and Jonathan had a ticket to ski films in Inverness. But we made the car park without torches and haven’t heard about any domestic grief for Jonathan. We called it Electic Brae (VI,7) due to the illusion, and Lurcher’s is definitely worked out now!”