Posted on December 21, 2015 by Simon Richardson 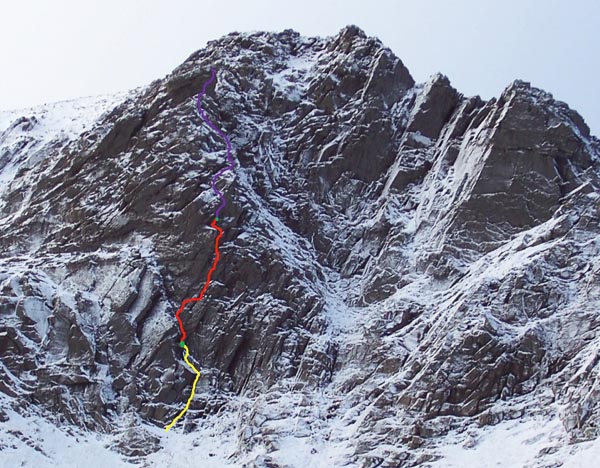 The line of Smokestack Lightnin’ on Fiacaill Buttress in Coire an t-Sneachda with the new Direct Start marked in red. The start of the purple line shows Variation Pitch 3 (now free) followed by the original top pitch. (Archive Photo/Topo: Andy Nisbet/Dave Almond)

After making the third ascent of Swallow Tail Pillar with Ian Parnell, Dave Almond teamed up with Simon Frost on Saturday December 12 and climbed a couple of notable variations to Smokestack Lightnin’ (VI,7) on Fiacaill Buttress. This challenging route climbs the full height of the left side of the buttress and was first climbed by Allen Fyffe and Andy Cunningham in February 1990. They used a peg for aid, and the first free ascent of the route fell to Alan Mullin and Andy Nisbet in December 1997.

“As I had been in Lochain the previous day we headed for Sneachda unsure of conditions,” Dave told me. “We had in mind Babes in the Wood as a possible option, but on arrival most climbs were looking white except Babes. We drifted over to Fiacaill Buttress and without reference to the guide, picked out what looked like an interesting line. Simon headed up as I consulted the guide. We had started on a direct start up Jailbreak, and after overcoming the first steep corner, began a link up to Smokestack Lightnin’ using the ‘mini’ Stirling Bomber style feature to gain the groove directly above the corner. This gains the line of Smokestack Lightnin’ but we moved left to follow the corner system keeping the line direct to the next ledge and then I stepped left into another groove to gain the big flat ledge on the top corner system, which is a variant finish for Smokestack Lightnin’. “

I’m not a Northern Corries expert, so Andy Nisbet stepped in to unravel exactly where Dave and Simon’s line lies with respect to the original Smokestack Lightinin’. It turns out that the Direct Start is new (and looks to be very good) but the link pitch is in fact Variation Pitch 3, which had not been climbed free before. Dave and Simon thought this section worth VI,8 on its own and the overall expedition merited VII,8.