Posted on December 22, 2015 by Simon Richardson 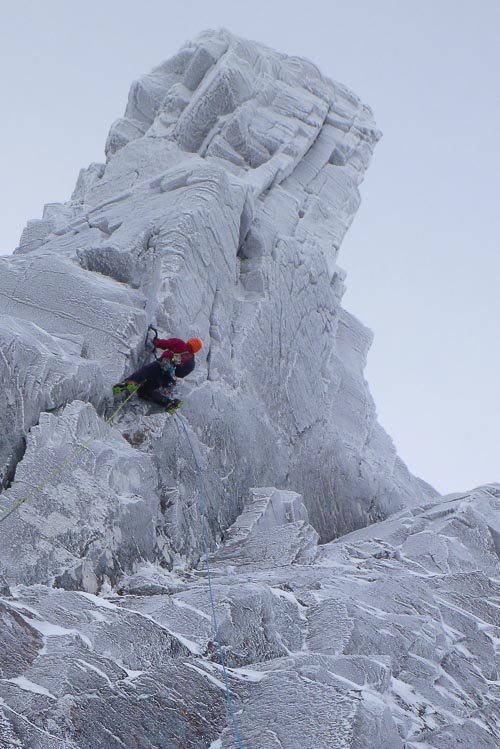 Dave Almond on the Northern Corries test-piece The Gathering (VIII,9). This exceptionally steep route lies on the pinnacle in the fork of Y-Gully in Coire an Lochain was first climbed by Guy Robertson and Pete Macpherson in February 2011. (Photo Helen Rennard)

Following his ascents of Swallow Tail Pillar and Smokestack Lightnin’ Variations, Dave Almond made another couple of important repeats in the Northern Corries with Simon Frost and Helen Rennard.

“On December 13, Simon [Frost]and I were joined by Helen Rennard and we headed in to have a look at The Gathering,” Dave explained. We were greeted by a very white, frosty cliff and as I looked up at the imposing line I gathered my thoughts. I had tried this line a couple of years ago with Dave Garry but this time I felt like I had put the work in dry tool training at Clogwyn Mannod, so I felt a lot more confident. It offers a nice gentle start with some Tech 4 climbing to warm you up before you get thrown on to the meat of the route. I found the angle, style and grade of the first pitch similar to where I have been training which made the climbing much more relaxing. Simon and Helen joined me on the belay before Simon lead off and committed to the testing moves away from the ledge making a fitting second pitch.  Congratulations to the first ascensionists on a three star route.

Continuing in the theme of third ascents, I unknowingly seem to have made the third ascent of Babes in the Wood on December 14 with Helen Rennard. It’s graded VIII, 8 in the guidebook however I have now altered my own copy to IX,8. The route follows the gully line so it’s ground fall potential until the initial overhang and then once on the steep slab the gear is atrocious with foot and tool placements getting smaller as you get higher with a crux move at the top protected by a Terrier which could pull and then you’re back to ground fall. I found this route more challenging than The Gathering and to describe Babes as being bold would be an understatement.

We walked in to the Lochain on Tuesday morning but backed off as my arms were feeling the effects of the previous four days of full on climbing!”

Postscript 22 December 2015: Dave, Simon and Helen’s ascent of The Gathering was the fifth ascent. Previous repeats were made by Greg Boswell and Will Sim in January 2012, Andy Inglis and Neil Adams in December 2014, and Murdoch Jamieson and Guy Steven in January 2015.