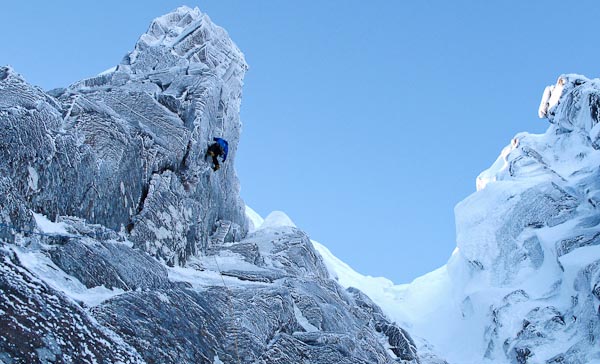 Guy Robertson on the first ascent of The Gathering (VIII,9) on Coire an Lochain. Robertson said afterwards that this was the hardest route he’d climbed in the Northern Corries to date. “Someone with mighty cahoonas will eventually go back and finish direct, and boy that will be some tasty little route!” (Photo Pete Macpherson)

On Monday February 28, Guy Robertson visited Coire an Lochain with Pete Macpherson and climbed the obvious counter-diagonal to Pic’n Mix, which takes the front face of the steep tower high up Y Gully. Guy had tried the line with Greg Boswell earlier this year, but he was still recovering from flu, so when he reached an impasse he down climbed to save the route for another day.

“This time the bitch yielded on-sight, but not without a considerable measure of puff and heave-ho,’” Guy explained. “A kind of right-trending ramp leads to a smooth, blank-looking wall, then on into a shallow groove and up over an ominous-looking roof at the top. All rather engaging ground-up and with no description!  The gear, fortunately, was pretty good, although taking more Friends would have made life easier. The hooks were good too.

Sounds easy?  Hmmmmm, when I let a few loops of rope down from the belay, they hung several metres out….On the second pitch Pete tried the second summer pitch of Never Mind, but ground to a halt where it tensions away right. I then went up and had a pop, but despite probing a couple of feet higher we just couldn’t find ice or a crack to keep going. In fact this entire pitch had been on ice, but it unfortunately it thinned out. The gear was poor, and some way below, the climbing very precarious and blind – come on man we have children to think about! In the end I balanced left to gain and finish diagonally left across a thinly iced wall (one runner) to join the last couple of metres of Grumbling Grooves.”

The pair named their addition The Gathering (VIII,9) because they shared the belay with Pete Harrison, Simon Frost and Dave Garry who made the third ascent of Pic’n Mix (IX,9). “ We shared a laugh,” Guy explained, “and they made Pic’n Mix look about grade III!”

1 Response to Gathering in Y Gully