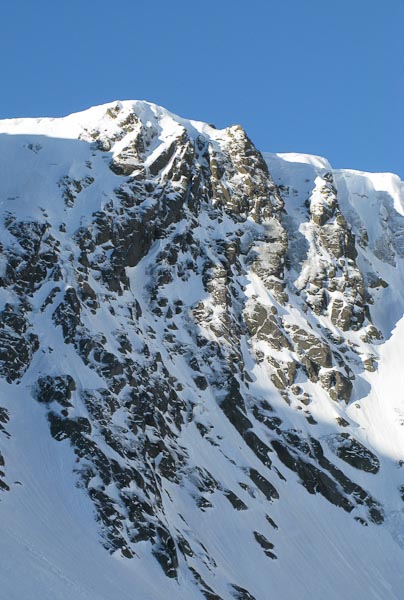 Glaucous Buttress in Coire an Dubh Lochain, Beinn a’Bhuird looking magnificent in the early morning sun. The sickle-shaped snow couloir on the left leading to a narrow chimney is Polypody Groove (IV,3). The ground just to its right is Tearaway (IV,4) which finishes up the groove just right of Polypody. Crystal (VI,7) climbs the groove-line right of the sunlit central crest and then continues up the headwall directly above, just left of the steep tower on the right-hand edge. (Photo Simon Richardson)

Last week’s thaw and re-freeze meant that ice, or icy mixed lines, were going to be the order of the day for this week. Roger Webb and I decided to visit Coire an Dubh Lochain on Beinn a’Bhuird to have a look at a line on Glaucous Buttress. I’ve climbed over 50 routes on Beinn a’Bhuird, but never on Glaucous Buttress itself, which needs specific conditions to bring it into winter condition. The lower summer slabs need to be covered in snow, but the buttress faces north-east and the upper headwall catches the early morning sun. The window of opportunity is mid winter therefore, when there is enough snow build up, but before the sun gets too high in the sky.

Monday February 28 was a beautiful day. Glaucous Buttress was beautifully icy and looked supreme in the early morning light. It was more reminiscent of Ben Nevis than the Cairngorms and our route went exactly to plan. We climbed the prominent groove to the right of Tearaway in the lower section to gain the steep headwall. The first pitch on the headwall looked rather imposing – steep with no obvious cracks, but once started the climbing was technical and absorbing with good protection. The final pitch up a thinly iced open groove was the complete opposite – Roger sprinted up it without pausing to place any gear, but fortunately the angle had eased back a little.

We named our VI,7 route Crystal in memory of Chris Dale who tragically died a few days ago. Chris was one of the quiet men of Scottish mountaineering with a string of outstanding first ascents across the Highlands and the Alps. He was a prodigious talent with routes such as The Argonaut (VII,8) on Lochnagar, climbed way back in 1984, to his credit. He will be missed.

We sorted our gear on the plateau and then had a leisurely stroll to the South Summit with the Cairngorms spread out before us, and then dropped back down to the bikes in the Fairy Glen. “This is the best day of the winter,” Roger declared, and I had to agree.