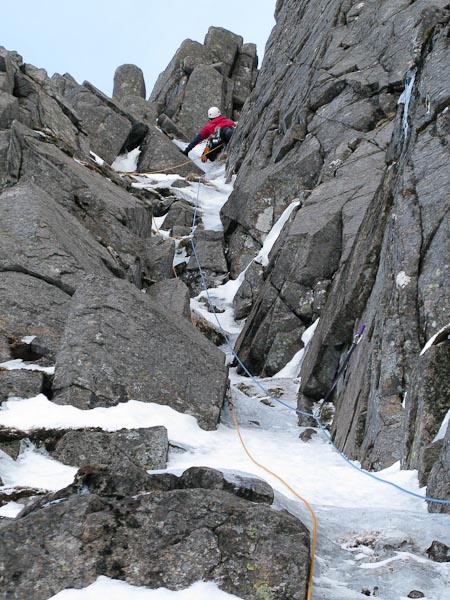 One rainy Sunday several Septembers ago, I ran up to Lochnagar and scrambled up Central Buttress. Near the top I found an abandoned rope, tangled around several large blocks, so I coiled it and continued on my way. Once on the plateau, I reversed the top section of Shadow Buttress A and then used the rope to make a classic abseil down to a ledge level with final tower of Multiple Chimneys. I untied and traversed the ledge to underneath the chimneys. Here I made a surprising discovery – there was a superb hidden curling groove tucked in deep between the Feathered Arete and the Multiple Chimneys buttress. It didn’t look very hard, but it was a superb well-defined feature and ideal for a winter ascent.

The curling groove came to mind this week when Helen Rennard and I were planning a trip to Lochnagar for Wednesday March 2. Monday’s visit to Beinn a’Bhuird had shown that the shaded north-facing grooves in the eastern Cairngorms were attractively iced, and this was confirmed when Iain Small sent me a photo from Sunday looking into the upper reaches of Shadow Couloir. And there it was – the hidden curling groove, lined with the tell-tale grey of good ice.

The problem was how to approach the curling groove? All other routes high up on the left wall of Shadow Couloir (Multiple Chimneys, Tower Finish and Maron’s Buttress) start up Polyphemus Gully. The ideal solution would be to find an independent start left of the start of Polyphemus, but the only way to find out was to go and have a look.

We were in luck because the steep wall left of the entrance to the gully was dotted with attractive blobs of snow that led across a ramp, through a bulging roof and into a hanging corner above. Inevitably, once climbing the pitch, the angle steepened considerably, and it proved to be a sustained and strenuous lead, but eventually the angle kicked back to an icy ramp.

We coiled the ropes on the plateau feeling very happy. Finding a completely new independent line up the main face of Lochnagar is a rare event. It just goes to show that a little bit of reconnaissance can go a long way!