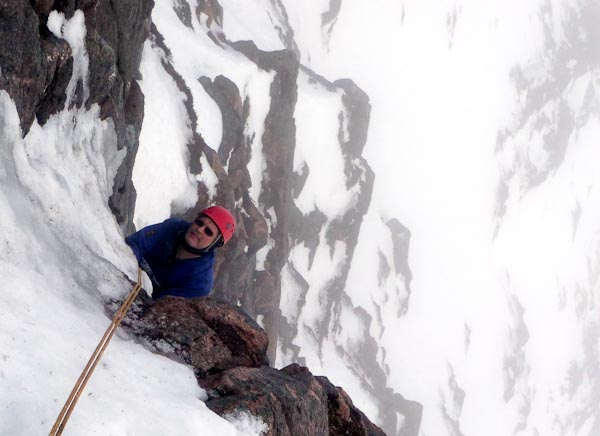 Duncan Tunstall pulling over the final bulge on the first ascent of Machete, Creagan a’Choire Etchachan. The route was graded V,5 in thawing conditions, but it may be IV,5 when completely frozen. (Photo Andy Nisbet)

On Thursday March 3, Andy Nisbet and Duncan Tunstall visited Creagan a’Choire Etchachan and made the first ascent of Machete (V,5). This is a companion route to Kukri (first ascent earlier this season) climbing the lower section of the grassy fault but finishing on the right. A complete ascent of the fault would be logical but the lower section is slow to ice up.

Andy takes up the story:

“Wednesday was forecast very windy so we chose Thursday for a visit to Creagan a’ Choire Etchachan. I had tried to walk there in the wind earlier in the winter and gone home. But sometimes you can’t get it right, as lots of folk were climbing on Wednesday and sensibly, not many on Thursday. It was warm! Duncan and I live on opposite sides of the Cairngorms so we agreed to meet at the crag. Fortunately [as it turned out] there’s no mobile reception so we were committed.

I walked through Sneachda seeing all the buttresses black and heading for a lower cliff, spurred on only by a picture on the Southern Cairngorms SAIS blog which showed plenty of snow in the central Cairngorms. Neither of us were convinced the other would turn up but we met in a place where all you could see was black slabs. But when you’ve travelled several miles you might as well go a couple of hundred metres for a look. Almost miraculously our intended groove was iced, and maybe the only ice on the entire crag. This was the lower section to a route Kukri, climbed earlier in the winter when everything was frozen but there was no ice in the lower groove.

I set off up very high angled wet snow, which did seem to take your weight if you kicked hard enough, to reach a barrier wall in the groove. Some of the ice was detached, as my nose discovered, but a couple of steep turfy moves allowed better ice to be reached, but there was still a worrying pull over the final bulge with a lonely runner well down.

We agreed on technical 5 but I insisted on V rather than IV, working on the principle that the leader gets to choose the overall grade. But I had to agree that it might have been IV without the trickle of water on your head. The upper groove looked attractive but Kukri goes there, so poor Duncan was sent up a ramp on the right, nice climbing I thought but he hasn’t let me forget that the upper groove was the obvious line and future ascents will probably go up there.”