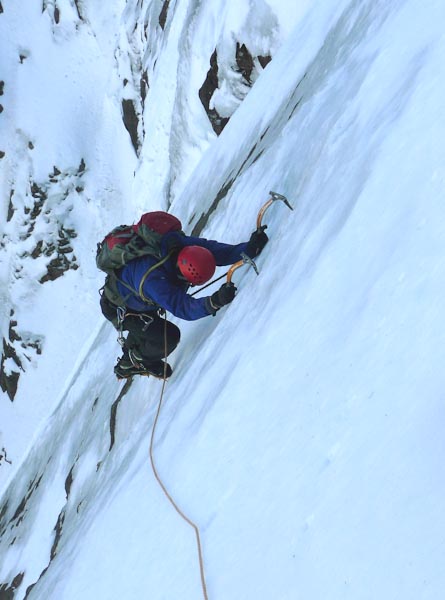 Duncan Tunstall enjoying perfect neve on the first ascent of Genghis Can (IV,4), Garbh Coire, Beinn a’Bhuird. The route takes the left side of Mandarin Buttress, crossing Salamander, and was climbed entirely on ice and snow. (Photo Andy Nisbet)

East is Best at the moment – Andy Nisbet explains:

“Conditions had to be good somewhere and it wasn’t Etchachan. So when Simon reported a perfect day, I wanted one too. So I searched out my projects file and looked up Beinn a’Bhuird. The left side of Mandarin Buttress seemed not too steep and might have held snow, plus the forecast was cooler. The cycling tracks were dry and the snow hard so Duncan Tunstall and I reached The Sneck in good form with the only worry being whether there was any snow. Impatient as usual, I rushed into the shade to see and five minutes later I knew it was on.

We started up a ramp and groove just left of the summer route Surgeon’s Slab. Rather than being bare, it was all ice and we soloed happily up to the mid-way terrace. Above was steeper and continuously corniced all the way across to the gully where Salamander finishes and the right crest where the other routes finish. Duncan was keen to try a direct line up the steepest section, and there was an iced groove leading up to the cornice. I thought it looked like epic terrain though I admit the cornice may not have been as big as my imagination said, so I headed up the intended line on to an iced inset slab where at least we could traverse left to the Flume cornice break.

Gaining the slab was steeper than it looked and some of the ice was detached, so I think we made the right choice. I found a rock belay and hinted that Duncan might try the cornice. The obvious place wasn’t and he wisely tried further left. Here it was rock hard, enough even for an ice screw, and a big pull gained (with some relief) neve on the plateau despite the sun. I’ve always been curious as to why Mandarin Buttress was so named, but I doubt it was the comic super villain, a descendent of Genghis Khan. But Duncan’s name Genghis Can (IV,4) seemed appropriate.

Duncan had to head home but I couldn’t resist staying to climb South-East Gully which looked in good nick. I’d failed on it 35 years ago and had been pretty grumpy when Alfie Robertson had led up 45m in softish snow without finding a runner or a belay, then climbed back down 45m and refused to let me have a go. What a sensible decision – I didn’t see a single crack anywhere on the sidewalls. It seems weird that I’d be back so many years later to solo it. Later in 1976 we were back heading up towards it when it avalanched. We even had to run to avoid the debris. We thought we’d better switch to a buttress and were just contemplating Mandarin Buttress when it avalanched and swept the whole buttress. With any sense we’d have gone home but we did Comala’s Ridge and it didn’t avalanche.

South-East Gully was in magnificent nick; every placement was first time and varied between concrete hard snow and proper white ice. There was no great build-up so you had to pick the correct line, also lots of mini-umbrellas. But far from being fragile, they were topped with perfect white ice. A steep pitch high up was getting closer and looked unexpectedly steep. What great climbing it offered, with quite a technical move climbing up beside an umbrella until you could bridge onto it. And no cornice at the top; you just walked out into the sun.

It was a perfect day, and I couldn’t resist posting on UKC about how good it was. Rob Durran took up my suggestion the next day and later posted, ‘Just got back from a fabulous day. Didn’t see another soul in 11hrs car to car. Just the sound of the ptarmigans while belaying. And was that ice good or what? Quite glad of it too on the steep bit…… Yes V,5 not to mention ***. The sort of day when I feel I am being paid back for all the gnarl and suffering and know that there is no better place to climb than Scotland.’”