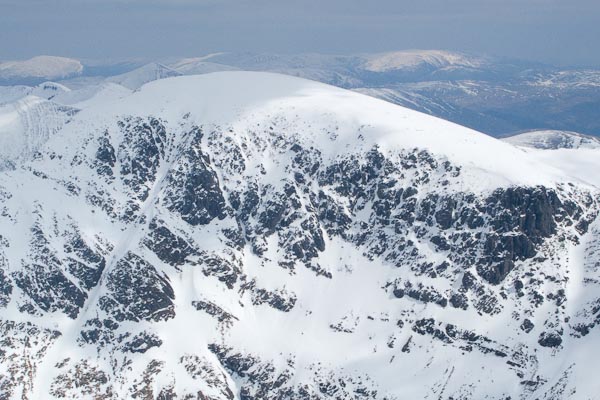 The West Face of Aonach Beag from the summit of Ben Nevis. The triangular Broken Axe Buttress is on the left and the trapezium-shaped Raw Egg Buttress on the right. The broken ground between them forms a fine series of icefalls that are often in condition late in the season. Glycerol Gully (II) lies just left of centre. (Archive Photo Simon Richardson)

Andy Nisbet had a great weekend, climbing two routes on Beinn a’Bhuird on Saturday and a visit to the West Face of Aonach Beag the following day. Here is Sunday’s story:

“My legs needed an easier time so I headed towards the Gondola with the hope that misty weather would clear and I’d find an ice line on Aonach Beag. It didn’t clear and the west was warmer than the east, but I picked my way down under the West Face and was lucky to recognise the approach to Cryogenic Corner, climbed a few weeks before. The line to its right still held ice, although it was very wet and you could hear the water flowing underneath. Glycerol Gully (Grade II) was a name which contrasted with the condition of Cryogenic Corner.

Aonach Beag’s summit was well frozen but I’ve always found it a spooky hill, with the summit perched on the cornice and the cairn always buried. Leading a large party up there in a white-out as a student, we tied an ice axe on the end of the rope and kept throwing it ahead to see if we were about to walk over the cornice. We didn’t but there was only relief, not pleasure when we got back down. This time I chickened out of the summit and was heading down when I found footsteps from yesterday. I knew it had been clear so I followed them back up to where it went flat and they wandered about, obviously trying to decide where the highest point was. Not a prefect day, what a difference a couple of degrees of temperature makes.”

Simon Richardson is a passionate Scottish winter climber
View all posts by Simon Richardson →
This entry was posted in New Routes and tagged Andy Nisbet, Aonach Beag. Bookmark the permalink.