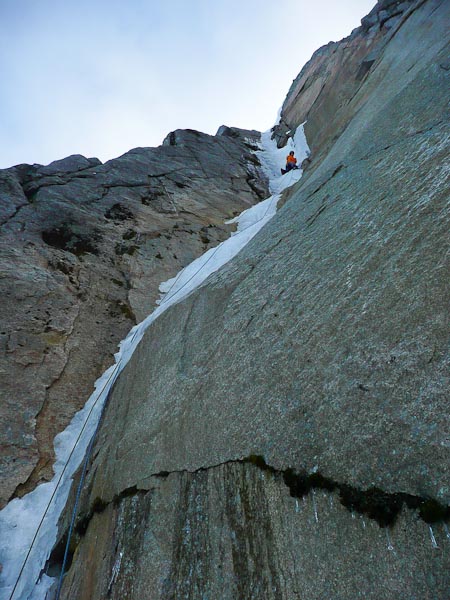 Steve Fortune climbing the crux groove of Parallel Gully B on Lochnagar. A massive rock fall eleven years ago removed the right wall of the lower chimney and the route has rarely formed good ice since. (Photo Chad Harrison)

Lochnagar has been in good icy condition recently. Polyphemus Gully has seen close to 20 ascents with many teams stating that it is easy Grade IV. Other icy gully lines that have been climbed recently include Parallel Gully A, West Gully, Gargoyle Chimney, Giant’s Head Chimney. Moonshadow and Scarface. But perhaps the best indication of good conditions is that the lower section of Parallel Gully B is a continuous streak of ice.

Parallel B is not really a gully at all after the 2000 rock fall, and its famous initial chimney is now an open groove defined by fresh clean-cut granite. It was climbed by Steve Fortune and Chad Harrison on Sunday March 6. “The groove is nicely iced up at the moment, if a little thin,” Chad said afterwards. “We thought VI,5 at present but more psychological than difficult. Excellent steep bulge higher up as well – a great route – it’s a mega classic line and very doable at present, and still worth three stars or more in my book!”

To the best of my knowledge, it was March 2010 when Jason Currie made the first ascent of Parallel B in its new state post rock fall, but it may have been climbed before. If you know of a prior ascent please add a comment or drop me an email.

Simon Richardson is a passionate Scottish winter climber
View all posts by Simon Richardson →
This entry was posted in Repeats and tagged Chad Harrison, Lochnagar, Steve Fortune. Bookmark the permalink.