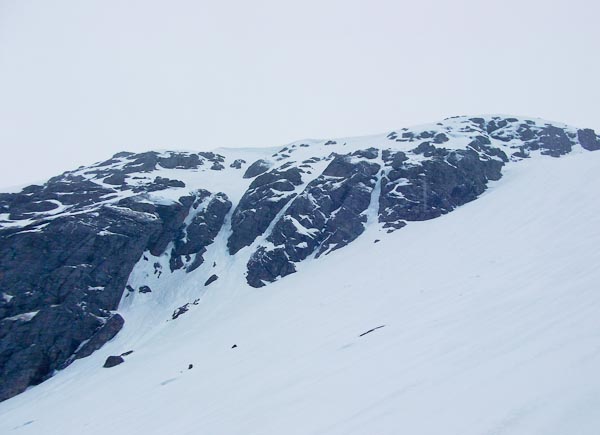 I was looking across to the central Cairngorms from the South Summit of Beinn a’Bhuird on Monday when Roger Webb asked me the name of the crag set back from Creagan a’Choire Etchachan. “Those are the crags above Loch Etchachan,” I said trying to sound like the local expert (Roger was making a rare visit south from his beloved North-West after all), “but nobody much climbs there much and there are only three winter routes.”

It turns out that I was completely incorrect about the number of routes, because on Saturday February 26, Michael Barnard added eight new climbs to the Loch Etchachan Crag!

“The left-hand chimney was the first line I tried here, thinking optimistically there might be an amenable way up behind an obvious large chockstone,” Michael told me. “Once I’d manoeuvred myself behind this I was no longer so sure and decided to downclimb and take the outside option. This required some careful bridging but the placements were secure and resulted in The Choker (III,5).

Scanning the other grooves I was at first a bit put off by the right-hand line which looked steep, but after discovering the good quality of ice on the nearby Make Like Shepherds (II) it seemed worth a shot. The snow in the lower section however was mush and it was almost a relief to reach the steep ice! After the thaw of the preceding days this was dripping and steadily providing me with a good drenching. Again a bit of bridging saved the day and gave Get the Flock Outta Here (IV,4).”

Elsewhere on the cliff, Michael also added Winter Wonderland (60m, II,3), Etched in Blue (50m, III), Central Couloir (70m, I) and Four Seasons in a Day (100m, III) to round off a busy and highly productive day!

Simon Richardson is a passionate Scottish winter climber
View all posts by Simon Richardson →
This entry was posted in New Routes and tagged Ben Macdui, Michael Barnard. Bookmark the permalink.