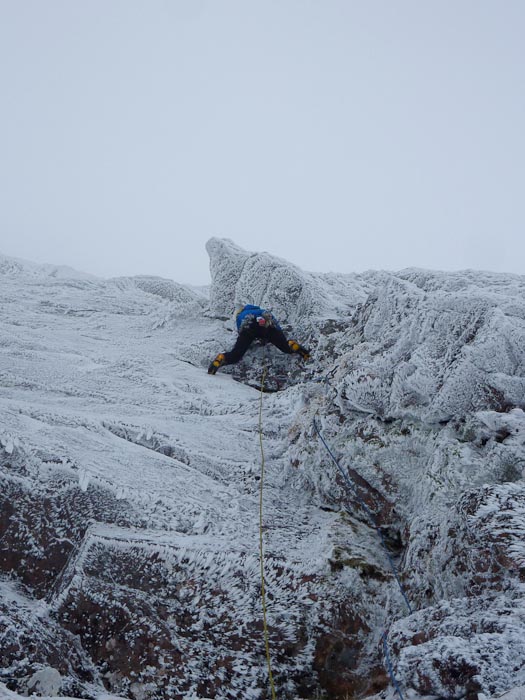 Guy Robertson on the second ascent of Extasy (VIII,8) on Creag Meagaidh. The route was first climbed by Dave Hesleden and Bruno Sourzac during the 2005 International Winter Meet. Sourzac used prototype Nomic ice tools – the first time they had been seen in the UK. (Photo Pete Benson)

Guy Robertson and Pete Benson made the second ascent of Extasy (VIII,8) on Creag Meagaidh on Monday February 21. This landmark route, which takes the awe-inspiring 300m-high wall between Smith’s Gully and The Fly, was first climbed by Dave Hesleden and Bruno Sourzac from France, during 2005 International Winter Meet.

Dave had tried the line of Extasy in 1994, but had ground to a halt after the first pitch. For several years afterwards, the climb was talked about by several activists with some saying that the blank nature of the rock meant that it would not be possible to protect without using bolts. In the event, the seven-pitch climb involved typically bold Meagaidh mixed terrain, very steep with poor protection, and five of the seven pitches merited a technical grade of 8. In 2005, Extasy was the most difficult Scottish winter first ascent ever to be climbed on sight, and was arguably the most important new Scottish winter route since Brian Davison’s ascent of Mort on Lochnagar five years before.

“It’s an absolutely stunning route,” Guy told me. “As you know, I’ve been to try it once previously but there was no ice and we nipped across onto The Fly. This time however, there was just enough ice in the right places. Really impressed with the climbing, which was very sustained, often serious and in places quite technical; definitely a solid VIII and not a route that would suit a gung-ho approach. All credit to Messers Hesleden and Sourzac for a masterful piece of route-finding!”