Getting Tactical on Beinn Dearg

Posted on February 25, 2011 by Simon Richardson 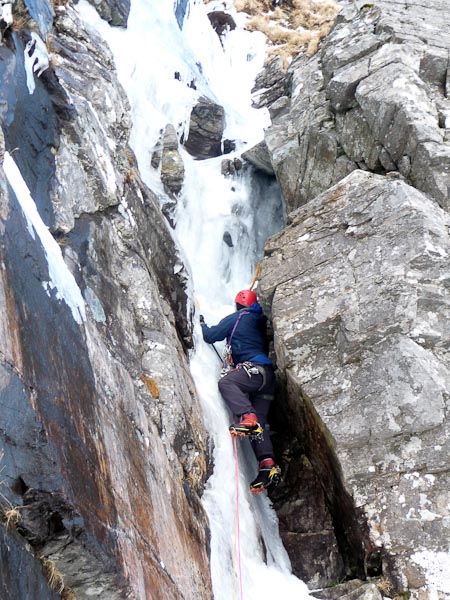 Duncan Tunstall on the first ascent of Pearl Buttress, Beinn Dearg. This IV,5 route is based on an icefall on the right side of the lower tier of the buttress containing Wall of Retribution on the Glensquaib Cliffs. (Photo Andy Nisbet)

Andy Nisbet and Duncan Tunstall had an energetic day on Tuesday (February 23), climbing two new lines, Pearl Buttress (IV,5) and Peace Process (IV,3), on the Glensquaib Cliffs of Beinn Dearg. The tactics for the day combined reconnaissance, psychology, conditions with a dash of verve and was conducted with all the efficiency of a military operation. It’s a complicated tale, so Andy takes up the story:

“Duncan had climbed Wall of Retribution on Saturday and been tempted by a thin line of ice to its right. It’s always a guess as to whether it would be thicker or thinner, with Duncan being optimistic and me pessimistic according to our usual character. But it was worth a visit, with plan B and plan C in reserve. The weather was drier but warmer than forecast and the ice had thawed a lot, so plan B was engaged, to bypass the lower ice by turf on the right. The ice was still thick on the second pitch, a fine chimney, leading to a big terrace. I began to wonder if Plan C could be climbed as well so I headed up the easiest line. Duncan’s enthusiasm for plan C had waned so he went left and finished up a steep but unexpectedly helpful wall.

Duncan had enjoyed Wall of Retribution but found it V,5 and was amused that I’d soloed it 30 years before, although it must have been in better nick despite the guidebook description of “unexpectedly steep”. So he suggested the name Pearl Buttress as a Pearl Anniversary for the cliff. IV,5 with the last pitch or III,4 by an easier option on the right.

Time was getting on, but knowing how good conditions were on The Ice Hose made me determined to look at plan C, linking up two very wet slab areas right of the West Buttress and which I’d spotted in the summer a few years ago. Sure enough they were thick ice, so despite the disparaging comment in the guide (which had come from previous editions) that the face was indeterminate and icefalls high up had been climbed, it seemed that 1000ft of snow and ice was unlikely to have been done and not recorded.

There was barely time even to solo and get back in daylight, so the ropes were left and fingers crossed that the wet ice was solid. As it turned out to be, but it still took an hour to climb quickly. As to whether it was Grade III or IV, who knows but as a big face with little rock, we went for IV,3. The name Peace Process seemed topical but hardly as amusing as the Rev. Paisley Memorial Gully, where each edition of the guide has to up the years in the description, “The second main gully is also straightforward, uncompromisingly direct, not to be taken too lightly and prematurely named (even after 35 years!).” Now 44 years and approaching the Golden Anniversary!”

2 Responses to Getting Tactical on Beinn Dearg