All Go on Cairngorm

Posted on November 15, 2010 by Simon Richardson 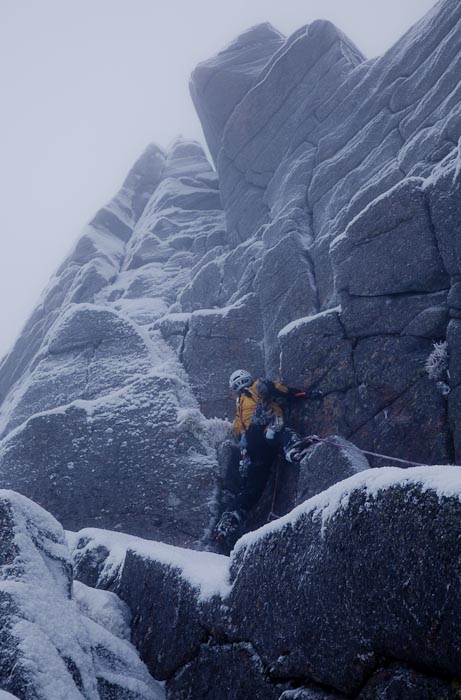 Sandy Simpson on the first ascent of Anvil Corner (VI,6), Cairngorm. This 60m-long two-pitch mixed climb is comparable in difficulty to The Hoarmaster in Coire an Lochain. (Photo Simon Richardson)

Yesterday (Sunday November 14), Sandy Simpson and I visited Creagan Coire Cha-no on the eastern side of the mountain. This little coire has three distinct ridge lines between 60 and 80m high. The longest rib gave a good III,4 on excellent blocky granite with a series of steep steps. Sandy then led the superb corner slicing through the vertical left wall of the central rib leading to the final ridge and an anvil-shaped block. Sandy thought it slightly harder than The Hoarmaster that he’d climbed two weeks earlier, so Anvil Corner (VI,6) seems an appropriate name and grade. We finished the day with the third rib which sports a compelling stepped flake system leading to a bulging offwidth corner. After a fierce struggle (and a short fall) I reached a broad platform, and as dusk fell, Sandy led the final wide crack to the plateau. This was a tougher proposition than Anvil Corner, so VI,7 is probably a fair reflection of the difficulties.