New Grade VIII for The Ben

Posted on November 16, 2010 by Simon Richardson 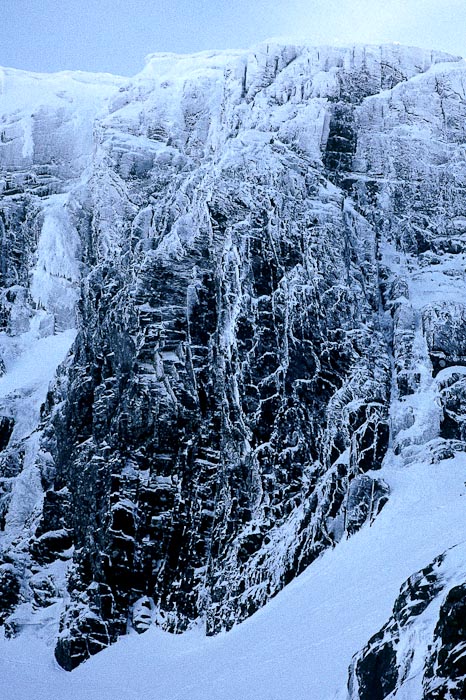 News just in… on Saturday November 13, Steve Ashworth and Paddy Cave made a significant addition to Number Three Gully Buttress with Apache (VIII,9), which climbs the bulging wall to the right of Sioux Wall. This imposing shield-like feature is cut by a straight crack line that is gently overhanging throughout its length. Paddy led this crux pitch, which Steve reckoned was slightly more sustained than the crux pitch of the next door Sioux Wall.

The first ascent of Apache stands alongside The Secret as a significant achievement. Climbed on sight on the first attempt and venturing on to territory untouched in summer it represents the future for hard mixed climbing on Ben Nevis.

Steve and Paddy were part of a strong Lakes team that had a very productive three days on the mountain. The following day, Paddy and Mike Wilson climbed Cornucopia (VII,8), whilst Steve teamed up with Chris Stirling to make the second ascent of Turf War (VI,6) on The Douglas Boulder.  Turf War was first climbed in 2004 by James Edwards and Gareth Hughes, and is based on the summer line of Militant Chimney.

On the third day, the team wound down on South Trident Buttress with The Slab Climb (VI,7 – Paddy and Chris) whilst Steve and Mike climbed Pinnacle Arete (IV,5). Throughout the trip, conditions were severe with blowing spindrift and steadily accumulating snow resulting in avalanche conditions on the third day. Also on Monday, locals Kenny Grant and Alan Halewood made an ascent of Cutlass (VI,7) on The Douglas Boulder.