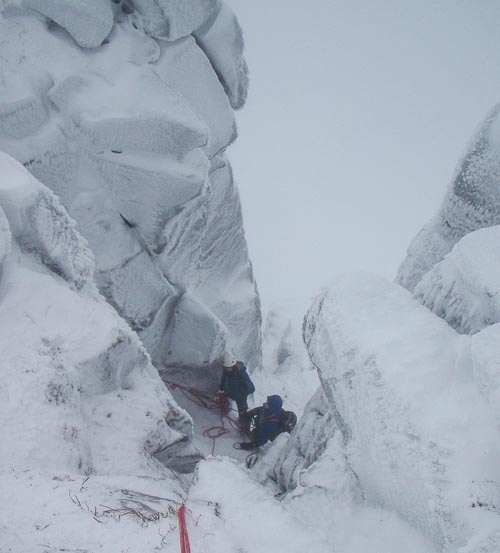 Looking down to top part of Anvil Gully on Creagan Cha-no with the Right-Hand Finish (IV,5) cutting through the right wall. “The fun was in gaining a right foot standing position on the block directly above Gregor’s head and then leaving that to gain the groove.” (Photo Martin Holland)

“I was out on Creagan Cha-no yesterday [January 10] with Tony Credland and Gregor Ewing,” Martin Holland writes. “After climbing Anvil Gully we were looking for something quick to do and abbed back down to a belay just below the top corner of Anvil Gully (thread on the right).

We then did a short right-hand variation finish to Anvil Gully, which climbed the initially steep corner-groove finishing at the narrow neck directly behind the Anvil Block. It’s a short variation and I’d be surprised if it had not been done before, but gave some excellent moves on good hooks and might be worth a mention. It probably went at IV,5 on the day.”

As Martin explains, it is unlikely that such an obvious finish to the very popular Anvil Gully has not been climbed before, so if you know of a previous ascent please get in touch or leave a comment.