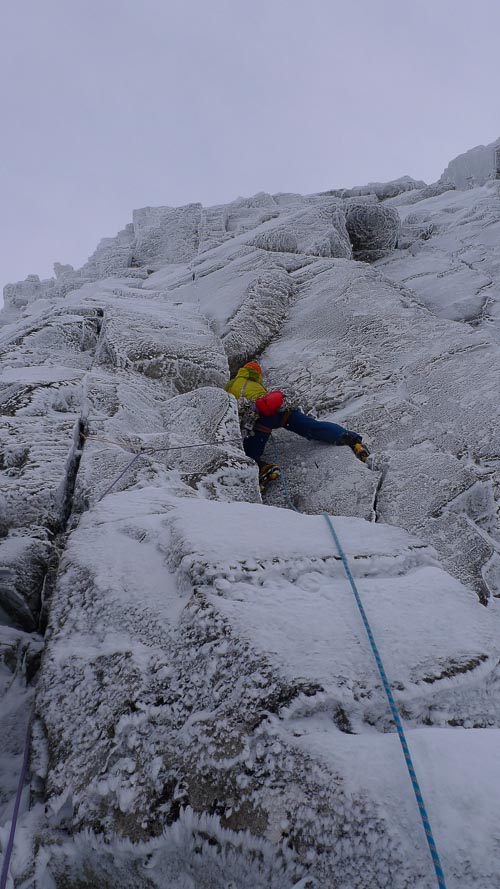 Uisdean Hawthorn doing battle with the fierce second pitch of Crusade (VII,8) during the second ascent. This steep line on Church Door Buttress was first climbed by visiting US climber Steve House with Sam Chinnery during the 2005 International Winter Meet. (Photo Iain Small)

On January 9, Iain Small and Uisdean Hawthorn pulled off an important repeat when they made the second ascent of Crusade (VII,8) on Church Door Buttress in Glen Coe.

“After climbing up on Church Door Buttress in summer 2013 I had liked the look of the line Sam Chinnery and Steve House climbed during the BMC Winter Meet of 2005,” Iain told me. “It’s the furthest right of the winter lines before the buttress becomes dominated by the great summer Extremes. Up on the Ben after Hogmanay on a windy day of iced cracks and spindrift, we came across a solitary Yank foiled in his pursuit of taking photographs of his fellow climbers. They were on Knuckleduster and it looked unhelpfully verglassed.

‘Who are they?’ we enquired.

‘Steve and Josh,’ came the reply.

So it was Steve House – that explained a lot!

Later in the week Uisdean was in the Coe with Ben Bransby for a couple of days, reckoning mixed conditions would be fine there. I teamed up with them on the Saturday and suggested Church Door Buttress having had my memory jogged about Steve and Sam’s line up there. It was a steep line of corners and flakes, the second pitch giving the crux for Uisdean. Not surprisingly it’s pretty tough for the grade and in a great situation!”