Moonshine in the Lost Valley 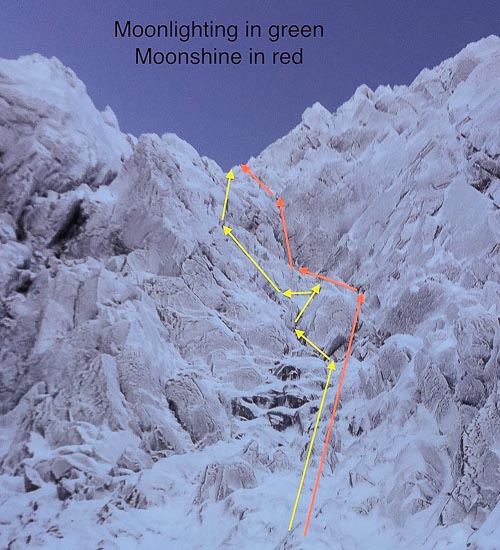 The lines of Moonlighting (V,6) and Moonshine (V,7) on Lost Valley Buttress in Glen Coe. Rab Anderson, Gavin Taylor and N.West made the first ascent of Moonlighting in January 1988 during the active wave of Glen Coe mixed climbing development in the late 1980s. (Photo/Topo: Mark Chadwick)

On January 9, Mark Chadwick and Simon Tietjen climbed Moonshine (V,7), a probable new line to the right of Moonlighting, on Lost Valley Buttress.

“On Saturday a few of us gathered in the Glen Coe car park with plans on seeing how conditions were looking up at the Lost Valley Buttress,” Mark explains. “And yes, we were tempted up there by some of the photos we had seen from the strong team that had visited a few days before! We were not the only ones with this idea, possibly more than eight other climbing pairs appeared on Saturday with a queue forming for Neanderthal, surely a first?

Big Si (Simon Tietjen) and I opted for the steadier route of Moonlighting (V,6). I climbed the first pitch and took an early belay before Moonlighting steps left into the narrow gully-chimney. This gave Si the option of climbing the right-hand fault line-corner, up to the peg belay of the original route, steep and initially overhanging into a fine upper corner. From here Si carried on up the same right line; the corner turned into a chimney with some steep hard moves out left then back right needing to be made. This pitch finished by surmounting the final chockstone and some thin off-angle moves to reach the belay of Moonlighting. From here we were back into the Pterodactyl (Moonlight Gully) and finishing up some nicely forming snow-ice.

The name Moonshine seemed to fit in with the stunning nights sky that we enjoyed the evening before, as well as fitting in with some of the drinking that was going on…”