Loads of Scope at Lurcher’s 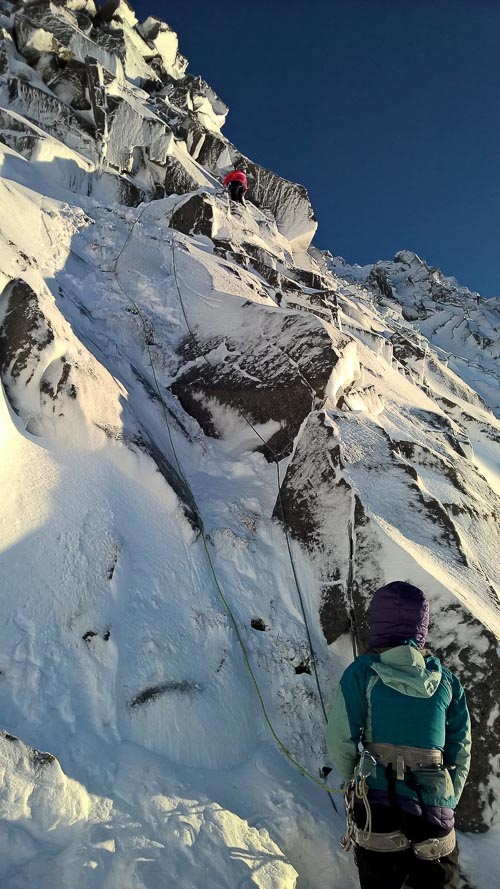 Andy Nisbet contemplating the best line on the first pitch of Snowbird (VI,7) on Lurcher’s Crag. During the unsettled weather that has defined most of the season so far, Lurcher’s has proved to be a happy hunting ground for the Nisbet-Perry team. (Photo Steve Perry)

“There’s loads of scope at Lurcher’s so we just had to go back (January 8),” Andy Nisbet explains. “Actually it had been snowing a lot from the east so its west facing aspect maybe wasn’t the best option, but we didn’t think crags in the west would be frozen, barring high on the Ben which is too far for a pensioner to walk. And a line on the Dotterel buttress on Lurcher’s was the most accessible line I knew.

Walking conditions would be tough in deep snow but Steve Perry is strong and his wife Katie was happy to carry the rack (all of it!). No-one had been anywhere else but Sneachda that morning, so it was trail breaking all the way. Despite that, we were almost at Lurcher’s before we caught Steve up, and only because he’d stopped for a drink. Not long after that, we were at the top of the crag contemplating avalanche conditions in Central Gully for the descent.

We played safe and headed for the rib on the far side, then hesitantly entered the gully. Actually the snow was pretty safe, despite being deep and soft; I think the temperature dropping several degrees overnight had helped but we couldn’t take any chances with a big ice pitch directly below the approach. The crag looked well plastered and our line resembled a vertical snowdrift. Sometimes I regret the loss of the big Terrordactyl adze we used to use. I hadn’t contributed much to the day so far, but now it was my turn.

I dug my way up an easy initial groove to big overhangs where the serious climbing would start. There was slabby ground on the right but it was a high angle snow slope plastered on to a slab. Lots of digging revealed some sloping footholds and a thin move led to a left-slanting crack blocked by a big wedged block. It was definitely possible but looked a bit wild for me, so with fingers crossed, I moved into a leaning corner further right. I knew I would need some luck as all I could see was steep smooth snow.

Initial digging revealed a foothold, quite a surprise on what looked like a smooth slab, and suddenly my mood improved. It was a precarious move getting stood on it, but now more slab could be cleared. A thin crack appeared, without any reason as to why it should be there, but enough to take an axe and a poor peg (only because I didn’t have the right size). There was no excuse for total commitment to the mantelshelf on to a sloping ledge. A groove now led to a definite line up through the overhangs, two of them in the groove to be precise. The more I moved up, the worse the rope drag became, so a belay was necessary below the first overhang. I knew I’d taken a long time and now it was nearly 2pm. The fact that the others found it hard was good for my ego but not ideal on time in early January.

Now it was Steve’s turn and above was steep. Lurcher’s is often helpful, occasionally the opposite, and everything was buried. The move out of the V-groove above required a lot of precarious digging but he made it after a considerable effort. There wasn’t much protection but a peg encouraged him on to the second overhang. This seemed to go more easily so he was now on an apparent skyline while Katie and I shouted up to ask whether the line continued. No, he replied, but much to our surprise, he announced that straight over the overhangs to his left looked best, and he duly pulled quickly over them onto what we hoped was easier ground. I was grumpy he hadn’t stopped to belay but it turned out he hadn’t joined the line of Dotterel, and it was a full ropelength before he did.

It was getting gloomy by the time Katie and I joined him, but now we were on known ground, although the depth of snow made it very different from last time. Still, the urgency of fading light got us up the last two pitches quickly and back to the rucksacks just as it got dark. Following our footsteps back to the car park by torchlight would be no problem.

The route was harder and more sustained than we expected, and independent for longer, so we were pretty pleased with it. A snowy name seemed appropriate but Snow Bunting had been used in Coire an Lochain [and Braeriach], so Snowbird was chosen (VI,7), even if snowbirds try to escape the snow. Still, Katie could count as a snowbird.”