Posted on January 4, 2016 by Simon Richardson 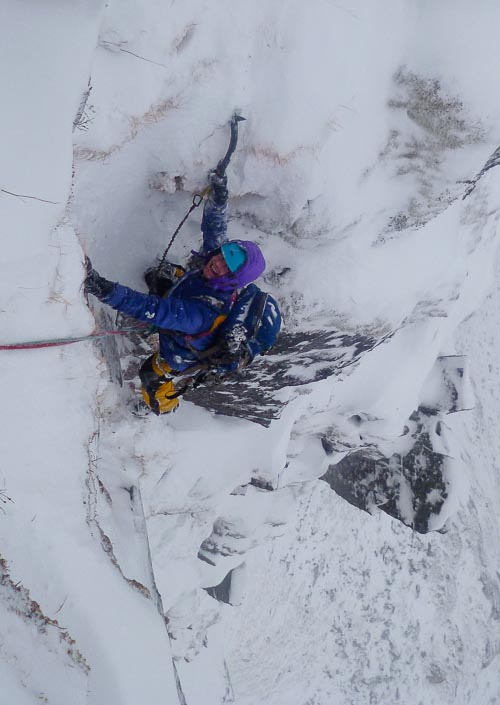 Mick James on the first ascent of Don’t Forget The Joker (IV,4) on Creag a’Chaorainn, a sub-peak of Sgurr na Lapaich in the Western Highlands. There are two existing routes on the cliff that lie further to the right. (Photo Graham Stein)

“Being rather starved of climbing opportunity recently, I was keen to make the most of the colder conditions on New Year’s Day and found willing volunteers to head in to Creag Loch Tuill Bhearnach North of Loch Mullardoch,” Graham explained. “Mick James had been for a run up Sgurr na Lapaich on Hogmanay, reported good conditions and was keen for some climbing. He is a fit puppy… Johnny Dyble was also up for curtailing Hogmanay drinking with the lure of a good day’s climbing.

After a significant slog through deep powder punctuated by several surprise bog encounters, we reached the col opposite the crag. Jonny was looking pretty rough and had to make a retreat to the car, but his gear hauling contribution to that point was greatly appreciated by us.

In the end, time was not on our side, so Mick and I decided to try a line on the North facing buttress of Creag a’Chaorainn, which looked to offer a number of amenable turfy options. We found a line of weakness that was a shallow gully of about 200m with several short sections of steeper climbing. It felt about Grade IV,4 in turfy conditions.

Since Mick had the Ace Of Spades playing in his head on the walk in, as a nod to the passing of Lemmy and the useful Plan B nature of the route, we thought Don’t Forget The Joker would be a suitable name.”