Posted on January 3, 2016 by Simon Richardson 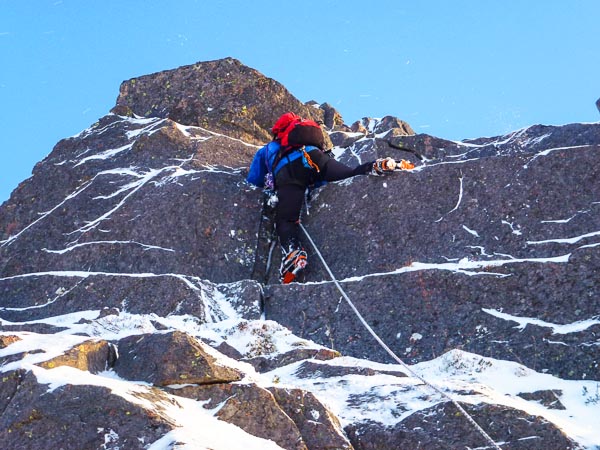 “Lots of snow, but where to go?” Andy Nisbet writes. “With Lurcher’s being ‘worked out’ that is. Of course there is that scrappy line I left to solo some time when I didn’t have a partner. So why am I going there with five other companions? Well, I guess we’re obsessed with new routes, even ones expected not to be any good. And we’re still stuffed with Christmas pudding and all the other sweet goodies (December  27), so an easy route to solo would suit. However much planning you do, things often don’t work out, but it isn’t half nice when the day turns out much better than you expect.

To start with, it’s much easier trail breaking with six through the Chalamain Gap. To be honest, being sixth is particularly easy, but my role was pointing out the line. Finally we stopped and they asked, but I find Lurcher’s difficult from the north and I had to admit I’d no idea, but that we’d soon see it (he said optimistically). The hard part is that North Gully doesn’t look like much of a gully from that angle, and our route was just to its right. In the end, it was much closer than I thought, which was a relief in deep snow.

The aim was a ridge that forms the right bank of the right branch of North Gully, but the hardest part was expected to be a lower tier that gave access to it. It was going to be crowded on the route, so Sarah Atkinson and Billy Burnside decided to go and look at Arctic Monkey, a ridge left of Central Gully. That left Sandy Allan and me with 30m of thin rope and a few nuts, plus Steve and Katie Perry with a longer rope and slightly more gear.

I must admit it didn’t look easy soloing ground, deep snow covering lumps of unattached turf, but there was a soft landing so I started up. Very quickly I was up (momentum was crucial before anything collapsed), but as Sandy had the rope and I couldn’t get back down, there was an element of commitment as I traversed right to a slab of smooth rock covered with straggly bits of heather. Since there didn’t seem to be any belay or runners, carrying on was easier, and Sandy followed under protest. It seemed wise to stop and rope up soon, and Steve and Katie decided to rope up from the start, but it turned out to be quite a long way to the first decent belay crack.

By now my Grade II prediction was getting embarrassing, nor was I allowed to forget it, and the ground above looked harder. I’d hoped to climb some ice, but it turned out to be smears on smooth rock, so some steeper mixed ground would have to do. A short wall, fortunately beside the belay and again fortunately with a frozen sod of turf on its top, led to a corner topped by an overhang. But this is where the slabby terrain started to change to more normal Lurcher’s helpful ground, so there was a nice flake-crack off to the left and things were looking up.

All this had taken a while but now there was easy ground leading to the ridge, which turned out to be steeper and better defined than I’d thought. I tried to miss out the steep start but Sandy told me off and ordered me back down. “It only looks about Grade II”. I think this was payback for the start, but it did work despite my foot slipping off and both of us missing a heartbeat. A large block became detached when Sandy was seconding and he managed to hold it in place temporarily. We discussed where it might go, as Steve and Katie were out of sight below. It seemed like it should bounce into North Gully so he let it go (actually this was inevitable). But it was a surprise that it had so much momentum that it ignored all the slopes and just kept going straight. We shouted loudly but were fairly sure it had missed by a distance. Still, it was a relief when there was an answer.

Next was a short step that could be seen on my photo from a distance. It turned out to be an overlap with what one could guess as a snow-covered slab above. As Sandy moved up towards it, another large block ended up in his arms. He reckoned he could push it into the gully but the block had other ideas and headed down towards the pair below. Straight towards them, but this time it just embedded in the soft snow. Sandy committed to the move over the overlap, cleared the snow and found a fine horizontal crack across the slab. There was a big pull and a belay soon after, where Sandy discovered that the rope had almost been cut through by the block. Now we were down to 20m pitches but the route was effectively over. We even met up with Sarah and Billy for a sociable walk down.

We did wonder about waiting for Steve and Katie but they had appeared below and all seemed well. The wind was getting up and they would be at least an hour, so rather than freezing, we assumed they had torches and left them to it. It turned out they had faith in my prediction of a quick easy route (unlike me who did have a torch) but they made it to within 200m of the car before making a wrong turn and having to walk an extra mile in the dark.

But eventful routes are more memorable and we all decided that a 250m Grade IV,5 was better than soloing a Grade II. Steve was reading Ken Crocket’s book on the early history of Scottish climbing so the name Ultramontane came to mind, even if our route or team wasn’t quite as grand.”