Posted on December 28, 2015 by Simon Richardson 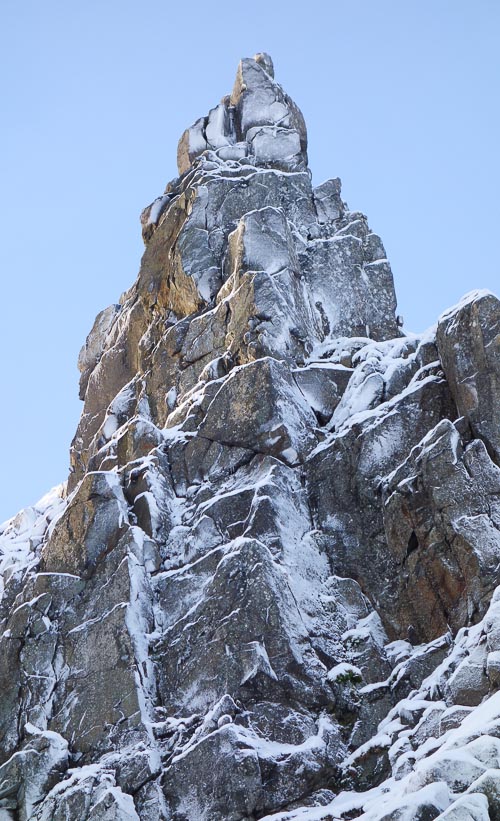 Incredible as it may seem, this 60m-high tower is not situated in Patagonia, Alaska or the Chamonix Aiguilles but in Glen Clova. The line of King Herod (VI,7) takes the left-hand of the two right-facing corners to the midway ledge and continues up cracks and corners on the rimed up wall on the right. Descent was by simultaneous abseil. (Photo Simon Richardson)

After the ferocious easterly winds and blizzards on Saturday, Ben Nevis was the logical choice of venue to take advantage of the ridge of high pressure that appeared on Sunday December 27. But I had an inkling that the weather may have brought an obscure rock tower on Cairn Broadlands above Glen Clova into rare winter condition. Sophie Grace Chappell was keen for a look, so we arrived on the steep slopes below the crag just as dawn was breaking.

The east side of Cairn Broadlands is very steep with some alarmingly unstable rock, but hidden amongst the rubble is a 60m-high pinnacle. It can be seen in profile from further up the glen beyond the stalker’s house at Moulzie, but it is impossible to determine quite how big it is. I went up to have a look one autumn, but turned back in face of impossibly steep grass and loose unstable rock. All I could determine from my high point was that there is indeed a pinnacle, and it looked very steep.

On Sunday, SG and I made a less traumatic approach by coming in from the south and contouring along deer tracks to the bay below the base of the pinnacle. It was immediately clear that our gamble with conditions had paid off as the easterly blizzards had frozen the turf and plastered the north facing aspects of the pinnacle with rime. The obvious line, which took the central groove-line to a mid-way ledge and continued by cracks and corners on the wall above, faced north which meant it was sheltered from the sun. I suspect that this route, that has a low lying elevation of only 600m, is only possible in deep mid-winter when the sun is low in the sky.

The front face of pinnacle was close to vertical, and every move from the base to the very top was interesting and challenging. It reminded me of routes on Cruachan’s Noe Buttress, which although relatively short, pack a punch from very bottom to top. We descended from the tiny summit by simultaneous abseil, a useful sea stack technique that avoided setting up a complicated anchor on the loose summit blocks. SG suggested we called the route King Herod (VI,7) as December 27 is the Feast of the Holy Innocents.

I’m intrigued as to who else has climbed this pinnacle. Dundee climbers have ranged far and wide all over the Angus Glens and their explorations have not always been well recorded, so please leave a comment if you know anything more about this remarkable feature.