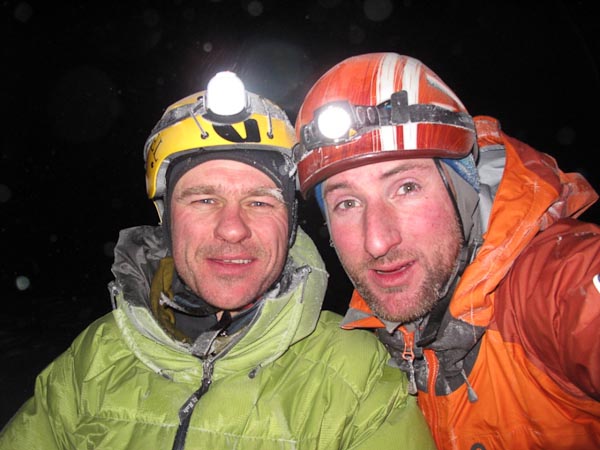 Guy Robertson and Pete Macpherson on top of the Shelter Stone after the first ascent of Stone Temple Pilots (X,9). In a winter of exceptional achievements, this was arguably the stand out ascent of the season. (Photo Pete Macpherson)

As temperatures shoot up across the country, winter is receding fast, so let’s take a look back on what has been a truly extraordinary Scottish winter season.

Before attempting to single out any individual performances or trends, the part the weather played, has to be acknowledged. The season was a long one, starting early and continuing consistently cold from mid October to late March. There some were superb settled periods during December and January, although conditions were a little more challenging through February and March. Late season classic ice conditions never really materialised, but even so, the 2010/2011 winter was one of the best in recent decades.

Activity levels hit an all-time high. Over 130 new routes and a dozen significant repeats have been reported on Scottishwinter.com. Full descriptions will appear in the 2011 Scottish Mountaineering Club Journal to be published in October.

What is particularly striking is the high standard of this year’s new route haul. In previous seasons the average new route would be about Grade IV, but this winter the majority of new routes have been V or over. Of note is the number of on sight Grade IX first ascents. Previously, only one Grade IX first ascent had ever been on sighted, (Defenders of the Faith (IX,9) on Beinn an Socach by Dave MacLeod and Fiona Murray in 2006), but this year we have seen eight!

It is difficult to single out specific performances, but Greg Boswell’s magnificent run of routes including the first ascent of To Those Who Wait (IX,9), stands out. Guy Robertson also had a scintillating season with no less than five new IXs, but his finest ascent was undoubtedly Stone Temple Pilots (X,9) on The Shelter Stone climbed with Pete Macpherson. Not surprisingly, Guy and Pete have been a little circumspect about the grade, but this route is a clear contender for the first on sight ascent of a Scottish Grade X. For me, the skill, fitness and sheer mountaineering ability to climb eight technically demanding pitches up a 250m-high cliff within the confines of a short winter day, makes Stone Temple Pilots the outstanding route of the season.

We have seen some remarkable repeats such as Andy Turner’s forceful ascent of The Hurting and the second ascent of the legendary Extasy on Creag Meagaidh, together with the development of new crags such as Eilde Canyon in Glen Coe and Creagan Coire Cha-no on Cairngorm. Andy Nisbet has continued to range far and wide across the Highlands, amassing dozens of quality new Grade V and VI’s.

But rather than specific routes, it is the sheer number of winter climbers operating at a high level that really sets this season apart. Routes like Sioux Wall on the Ben, have opened the door to Grade VIII for dozens of climbers, and this touchstone grade is now a realistic objective for many climbers.

So why the huge surge in standards? Undoubtedly a free flow of information has helped. Better guidebooks have set the foundation, but it is the real time routes and conditions beta on the Internet that has made the biggest difference. Throw in the latest generation of tools, (that at long last have hammerheads and shaft spikes), and we now have the technology to climb cutting edge mixed pitches and cope with the mountaineering demands of Scottish winter terrain.

But above all, there is a wave of increased confidence across the scene. Success breeds success, there is a spirit of constructive competition in the air and everyone has taken clear encouragement from each other’s achievements. Scottish winter climbing has been burning brightly for several years now, and there is no question that the passion and intensity now burns as fiercely as ever.

One can only dream what winter 2012 will bring!