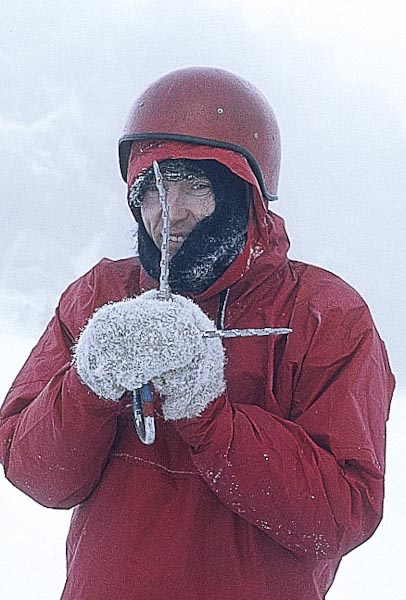 Doug Lang on Ben Nevis brandishing a bent warthog ice screw that held him on a fall on Comb Gully Buttress. Doug had a mountaineering career spanning six decades and was one of Scotland’s foremost mountaineers. (Photo Ken Crocket)

Iain Small and I had just descended from the Ben the Saturday before last when we heard the terrible news that Doug Lang had been found dead in an avalanche in Coire Fee earlier that morning.

The short message on my phone was almost impossible to comprehend. Doug appeared to be infused with the energy of perpetual youth. He had climbed non-stop in the Scottish hills for over five decades and showed little sign of slowing down. He was the ultimate role model in showing how it is possible to continue mountaineering throughout one’s life. The exact details of Doug’s accident will never be known, but it appears that he had climbed up to the head of Coire Sharrock, checking out recent additions and further new route potential, before descending A Gully, presumably with the intention of climbing a mixed line in Coire Fee.

Doug had been at the forefront of Scottish mountaineering for over 50 years. He is most well known for the development of Binnein Shuas with Graeme Hunter in the late 1960s, and the first ascent of Ardverikie Wall – one of Scotland’s most loved mountain rock climbs. Doug was at the cutting edge of Scottish rock climbing during that period with first ascents of Falseface and Sword of Damocles on Creag an Dubh Loch.

Winter was Doug’s forte, and Ben Nevis his major playground. Together with Neil Quinn, he cut steps up many the hardest routes of the day and including the third ascent of Orion Direct. They were key players in the curved axe revolution in the early 1970s, with notable first winter ascents of Slav Route (VI,5) and Left Edge Route (V,5), and in 1977 they climbed the 770m-long American Pie (V,5) on the North Face of Castle Ridge. On Lochnagar they made the first ascent of Winter Face (VI,6) on the Black Spout Pinnacle – a superb natural winter line that has seen very few repeats. Doug ranged far and wide, and other three star first ascents include the popular B Gully Chimney (III,4) in Coire Fee and The Wand (V,5) on Creag Meagaidh.

In recent years he formed a strong partnership with Colin Stead and was a regular on SMC Meets to the CIC Hut. The pair made a series of excellent additions to Ben Nevis in the 1980s and 1990s. I was particularly struck by the impeccable line of The Edge of Beyond (VI,6) on the East Flank of Tower Ridge, and very envious of Roaring Forties (V,6). This neglected route takes a compelling line up a beautiful V-shaped groove slicing through the headwall of Comb Gully Buttress and deserves to see many more ascents.

But it is Doug’s infectious enthusiasm that will be missed most. We shared a passion for overseas climbing journals, and without fail he would come bounding across the room between courses at SMC dinners to share news of the latest super route reported in the American or Canadian Alpine journals.

Doug was an inspirational president of the Scottish Mountaineering Club from 1992 to 1994. Hundreds of people paid their last respects at his thanksgiving service in Dundee this afternoon. Doug’s contribution to Scottish mountaineering was immense and he will be deeply missed.

Simon Richardson is a passionate Scottish winter climber
View all posts by Simon Richardson →
This entry was posted in Commentary and tagged Doug Lang. Bookmark the permalink.