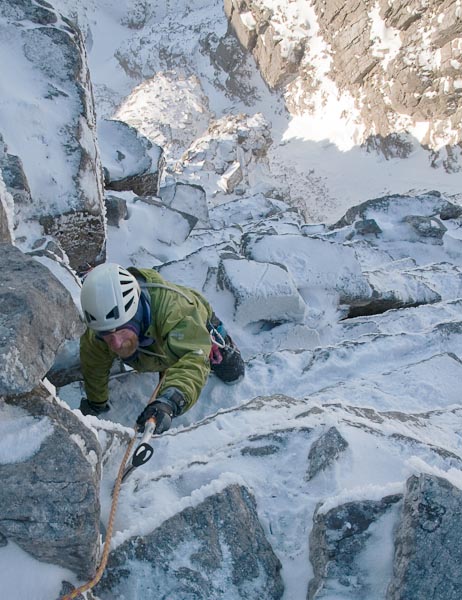 Andy Nisbet on the first ascent of Wild West (V,6) on the Far West Buttress of Beinn Eighe. This sustained V,6 takes the gully wall to the right of Westlife. (Photo Garry Smith)

Some late news – on Wednesday March 16, Andy Nisbet, Garry Smith and Jonathan Preston added another new addition to this year’s bumper crop on the Far West Buttress on Beinn Eighe. Andy continues with the story:

“Like me, Garry Smith had finished his winter’s work and the forecast was good. Walking conditions were difficult almost everywhere but we knew Beinn Eighe was not buried and the ground was frozen. But walking wasn’t going to be easy so a team of three was better to share the gear. Jonathan Preston was also keen on Far West Buttress, so he joined us.

There was quite a big trail up the path, and Jonathan and Garry had heard on the radio that it was the 60th anniversary of the plane crash in Coire Mhic Fhearchair, with RAF lads having been in to pay their respects (and in the best tradition to do some climbing too). Unfortunately only one set of tracks went up the front of the mountain and they did a U-turn halfway up. But the top was now in sight and we had three to break trail, so we made it only half an hour slower than normal.

So we reached plan A feeling fit and burst out laughing at my optimism. So a plan B was urgently needed and we wandered under the crag searching for something sensible. The gully wall right of a November route, Westlife, seemed to fit the bill. A soon as I set off, I realised my optimistic mood was still around, but the usual helpful quartzite and good protection kept me progressing. An initial corner had to link up with higher corners, but a view from the side showed a corner-crack in the wall. The pitch gave sustained climbing at technical 6 but with good ledges every few metres and led to the terrace.

Jonathan volunteered for the next pitch, which went under a huge chockstone and then managed to reach the right arete of the gully wall. This would have been pretty exciting but a ledge led right to an easier finish. Wild West was a name which suited the theme and V,6 seems the normal grade on this wall. Surprisingly the wind had got up so Garry got some good spindrift pictures as we bum slid our way quickly down to the path.”