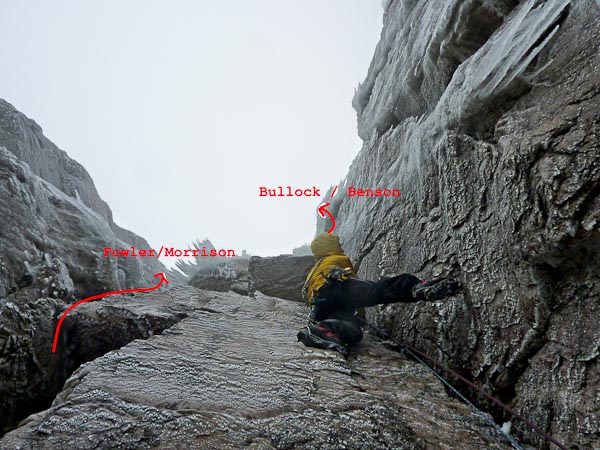 Nick Bullock on Bullhorn-Benson Variation (VII,8) to West Central Gully on Beinn Eighe. The pair climbed the route in error for the normal line last March and their new addition has only just come to light. (Photo Pete Benson)

I received an intriguing email from Pete Benson last week…

I have just been looking through my photos of last year with Guy [Robertson] of West Central Gully [on Beinn Eighe], and he was confused.

“Did you not climb the line on the left after the first pitch as described in the guidebook?”

“Ehh, no we climbed on the right!”

As we didn’t have a guidebook, Nick [Bullock] and I climbed the icy corner on the right to reach an icicle, which seemed like the obvious line on the day (it had much more ice) and followed this directly on thin ice up to the summit snow slopes. So it looks like we did a new line.

One look at Pete’s photo shows that this is indeed, a testing and challenging new line. I immediately checked with Pete to ask for a name and grade.

“I think the Bullhorn-Benson Variation sounds about the same grade as the original from speaking to Guy (VII,8) but it will be very dependent on the amount of ice available when you are forced to quit the corner and span to the thin ice on the right. As for a name… I think to leave it as a variation to West Central Gully would be the most appropriate!”