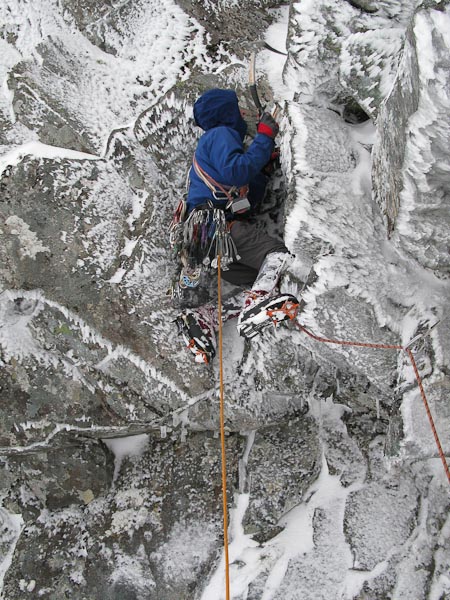 Iain Small on the fifth pitch of Rogue’s Rib Direct (VII,7) on Ben Nevis. This is the first time the 200m-high buttress to the left of Italian Climb has been climbed in winter. Previous ascents began at two-thirds height after starting up Italian Climb. (Photo Simon Richardson)

For Iain Small and I, it was another tough call this weekend on where to go. East or west, mixed or ice were the choices, but in the end our decision was simply based on access. After the heavy snowfalls last week we needed to choose somewhere high enough to be frozen, but also possible to walk in to. After throwing around various options, Iain said “Lets just go the the Ben. We know there is a trail up there. How about looking at the buttress left of Italian Climb?”

The feature left of Italian Climb is known as Rogue’s Rib and it was first climbed by Tom Patey and Jerry Smith in April 1956 as a summer rock climb. In typical Patey fashion, they took the line of least reasistance and started up the snow-filled Italian Climb to miss out the imposing lower buttress, and just climbed the top part of the rib. This was the line taken by Ian Clough and G.Grandison on the first winter ascent in January 1960, and to the best of our knowledge the complete buttress was unclimbed in winter.

Rogue’s Rib is an impressive feature. Black, prominent and menacing it frames the right side of Tower Ridge as you look up into Coire na Ciste from the CIC Hut. I’d wondered about climbing it before, but it is not often in winter condition, and it looked rather hard. After all, Patey and Clough were two of Scotland’s greatest climbers and not one to shirk a challenge.

So there was nothing for it, but to have a look for ourselves. On Saturday March 19 we gingerly approached the foot of Italian Climb, hugging the side of the cliff, and mindful of the avalanche in Garadh Gully that had swept some French climbers into the Gulch a few days before. It’s always exciting to launch up a ‘new’ feature, especially on the Ben, where the nature of the rock is all important. We know the Creag Coire na Ciste is well cracked for example, and the Orion Face is more blind and featureles, so what would Rogue’s Rib be like?

“The cracks are good and it’s turfy,’” Iain yelled down after climbing ten metres of the first pitch. He made good progress, but then slowed down.

“It’s slabby without much gear, but I think it will go…”

The rope paid slowly out and then it was my turn to follow Iain’s lead, and as usual I was soon admiring his skill and confidence. My pitch looked steeper but a hidden chimney led to a good platform. Iain then led an awkward corner and then a long connecting ridge to the upper buttress. This is where the Clough route joined. We didn’t get the guidebook out, but the natural way through the final tower was obvious and followed a narrow gully feature. The problem was the gully was bottomless and ended in an impending wall, so I climbed cracks on the right and then edged ever so carefully across smooth slabs into the gully bed. (An old in-situ peg and krab showed that someone had been that way before, and in hindsight the peg was probably used for tension). Once in the gully, the snow was unconsolidated and it was deceptively steep, but eventually I reached a belay below an undercut squeeze chimney

When Iain came up, he took one look at the chimney, and launched up the undercut wall above. This led eventually into a continuation of the squeeze chimney and the crest of Secondary Tower Ridge. Our day finished with a long pitch to Tower Ridge itself and then a quick down climb to reach the CIC Hut just before it became dark.

The climbing on the upper buttress was quite tough and we assumed that Clough and Grandison must have found an easier way, but when I read the guidebook this morning I realised they climbed similar ground to us – the delicate traverse and steep narrow gully, but finished up the squeeze chimney. Clough rated his route Grade IV, and uncertain of the grade I gave it IV,5 in the 2002 Ben Nevis guide, but a modern rating for their route would be at least VI,6.

A bit more digging through my bookshelves this afternoon (the Marshall guide and 1960 SMC Journal) revealed that their ascent took seven hours. I’m not surprised, because their climb was a major achievement for the day, and comparable in technical difficulty to the (now celebrated) Smith-Holt ascent of Tower Face of the Comb climbed just twelve months earlier (and also originally graded IV!)

Iain and I were less modest – Rogue’s Rib Direct was an excellent outing at VII,7 and a very enjoyable one at that!