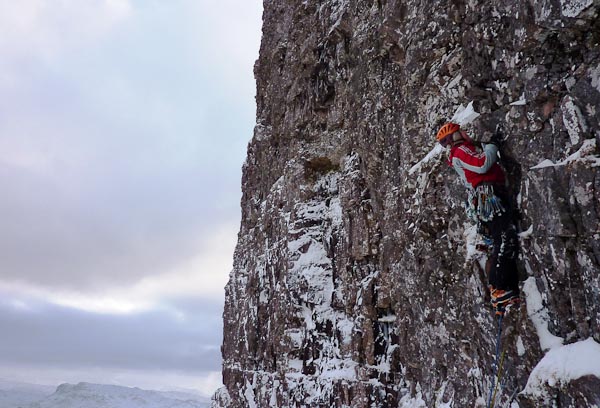 Pete Benson on the steep first pitch of Godzilla on Beinn Bhan. This new IX,8 takes a direct line into the upper pitches of The Godfather. “A super-direct, true winter-only line with awesome turf-dependent climbing and a really spectacular feel – the stuff of dreams!” (Photo Guy Robertson)

Pete Benson, Nick Bullock, and Guy Robertson added another demanding route to the Giant’s Wall on Beinn Bhan on Monday March 14. Godzilla (it was something of a monster) takes a direct line to join the last two pitches of The Godfather.

“I’d studied this part of the wall a bit,” Guy told me, “but I still didn’t think it would go on-sight as it takes in some pretty steep and complex territory. Pete sent a powerful corner-crack feature to get us going, but above this the upper half of the lower wall has lots of ill-defined, overhanging possibilities. After a fair bit of probing Nick unlocked this with a bold lead up a little groove involving strenuous tech 8 above very poor protection. I then managed to gain the first big terrace by another spooky and quite steep pitch with most of my runners apparently popping out underneath me! Pete stepped in to the fray again to blast the smooth corner above which just left us with a quick romp up the top section of The Godfather.