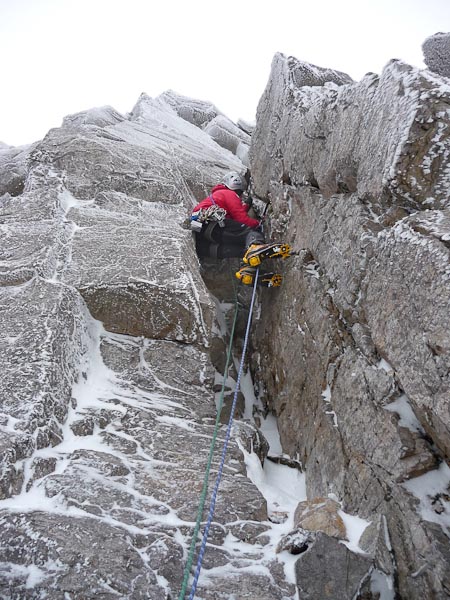 Steve Ashworth on the first ascent of Raptor (VI,7) on the Far West Buttress of Beinn Eighe. The picture shows Ashworth on the initial bulge which is shared with Crackhead. (Photo Andy Nisbet)

Andy Nisbet has continued his excellent run of routes on the Far West Buttress of Beinn Eighe with another new addition on Saturday March 12. The appropriately named Raptor (VI,7), is his seventh new addition to the crag this season, and was climbed with Steve Ashworth and Brian Davison.

Andy takes up the story:

“Brian Davison and Steve Ashworth were committed to coming up north when the weather forecast changed as a low pressure deepened. But it was still approaching from the south so the north-west seemed the best bet. It had been snowing much of the week up there, but I still had doubts whether the turf would be frozen. A short route on Beinn Eighe’s Far West Buttress was a safe option, then we could consider the weather for the Sunday.

There was no sign of the predicted sunshine when we arrived and I think we all knew the snow was arriving early. We had a trail-breaking Steve out in front and a party of three to split the load carrying, so we made the crag in good time despite the snow. My plan was to climb the improbable line the previous route Crackhead had escaped from, although I had seen that it was possible from No Fly Zone [a new V,6 climbed with Chris Pasteur and Duncan Tunstall] a couple of weeks ago.

I was happy to let the others do the leading, so Steve set off up the groove of Crackhead with reassurances that its key chockstone was solid. He was using prototypes of next season’s Grivel axes, with no hammerheads or adzes, so we wondered how he’d manage in the wide cracks. But the occasional can-opener move didn’t slow him down until he’d reached a roof in the main groove, well after the point where Crackhead leaves. Passing the roof on the left proved tricky but there was a fine rest in an eyrie below another roof and above some larger roofs. This also had to be passed on the left and proved tricky.

By now it was snowing and Brian had to choose where to go next. The logical line was the fault climbed by No Fly Zone, but I persuaded Brian to try the rib on its left. A roofed corner seemed like it might be different to Far West Buttress, so Brian started up this. The roof looked substantial so he made a huge step (by my standards) to a ledge on the right and then made some steep moves up the rib. Unfortunately he was forced into the top of No Fly Zone but by now the weather was deteriorating and the seconds weren’t complaining. As always on Beinn Eighe, there were some great moves, exciting exposure and good protection. The eyrie suggested the name Raptor and there was no flying, though we did cross its route. It seemed the hardest route so far on the crag, so VI,7 was agreed. The descent was quite a wade but the snow seemed safe enough!”