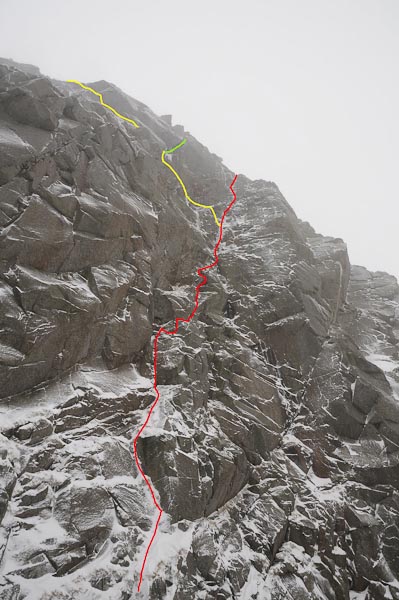 Last weekend was wild and stormy with significant snowfall across the Highlands. Despite this, there were good routes climbed on Ben Nevis, in Torridon, and in the Cairngorms. Several teams came back wide-eyed after full-on Scottish adventures, but the most exciting tale I heard came from Henning Wackerhage who visited Creag an Dubh Loch on Saturday March 11 with Robbie Miller and Andrew Melvin.

The team made good progress, but a route finding error on the fourth pitch led them out of the main corner line across a hidden weakness onto the undercut and very exposed left wall. After this difficult and committing lead, they realised they had made a mistake, and the situation began to look bleak when they failed on the next pitch. Instead, they continued left to reach a ledge in the vicinity of the summer E3 Wicker Man, and Henning made a bold lead up a leaning offwidth leading to a blank slab.

“The slab was the scariest climbing I have ever done,” Henning wrote on his blog. “Thin hooks out of balance with no gear and the central gully wall exposure below. Somehow I managed to inch up the slab to a position where a big tuft of turf and safety were near but yet so far. Some moss did not even yield a marginal placement but finally I excavated a poor sidepull, kept the axe steady, placed my front point out of balance high up and with a lot of stretch just about managed to whack the axe into the turf. The left axe followed and I made the sweetest pull up of my life, scraped my feet up, ran a few steps, fell mentally and physically exhausted into the snow and shouted ‘safe’ into the void below.”

It was now 7pm, but the epic did not end there. It had been snowing all day, and it took another four hours to wade back to the car park which was blocked with snow. Fortunately they were able to drive out with one of their cars, eventually arriving back in Aberdeen at 1am on Sunday morning.

The three-pitch More Vertigo Finish was given a technical grade of 8. “The final slab was the boldest and thinnest I have ever climbed,” Henning explained,  “and the psychological crux was the last move way above gear to reach that tuft of turf on the plateau. As for stars, the positions are wild and unlikely for the grade, especially the swing moves are excellent and the only minus is that the line is not straight up. However, I’d rather leave the grade and stars to others.”

There was a new addition in Glen Coe on Friday March 10 when Adam Hughes, Colm Burke and Dave Burke added the Japseye Variation (VI,6) to Yen on the Far Eastern Buttress on Aonach Dubh.

“I spotted a crack half way up the wall that was looking pretty good and whiter than anything else on the steeper routes,” Adam told me. “I could not find it in the guide as a summer or winter route, so thought we could give it a go. An easy pitch led to a ledge and belay below the crack. The crack was steep to start with thinnish hooks and poor feet, but good gear. This continued to a good rest at about 6m. Hooks improved with height from there after a tricky move from the rest. This led into a chimney at the top and easy ground. A great day out considering the poor forecast!”

One Response to Stormy Weekend