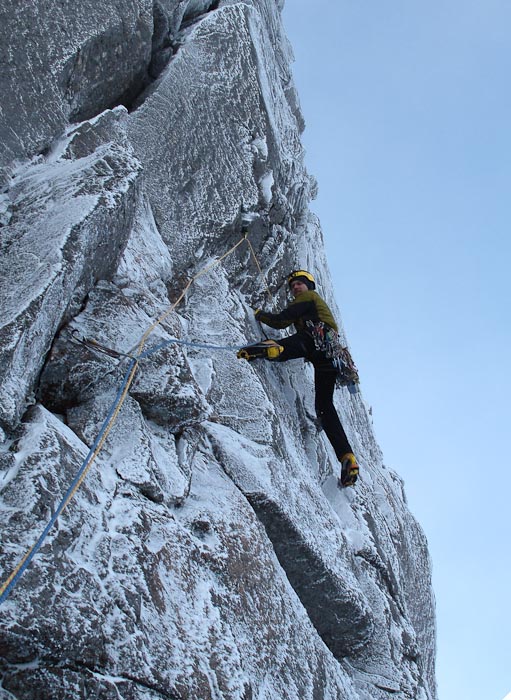 Guy Robertson on pitch 7 of Stone Temple Pilots on the Shelter Stone. The route links the summer lines of Steeple, Haystack and Spire directly up the front face of the crag and sets a new benchmark for continuous difficulty during a winter that has already broken all records. “Super-sustained, well-protected, strenuous and spectacular are just some of the many adjectives that spring to mind when describing this great climb.” Robertson said afterwards. (Photo Pete Macpherson)

Guy Robertson and Pete Macpherson pulled off a major coup on Friday (January 28) when they climbed a new direct line up the front edge of the Shelter Stone. Their new route, called Stone Temple Pilots (named after a 90s rock band), links the first three pitches of Steeple with the crux pitch of Haystack, followed by a new pitch into Citadel and a finish up Spire.

“For me, the Shelter Stone is in some ways Scotland’s ultimate winter cliff,” Guy told me. “It’s rarely in good wintry condition, it’s remote, the routes are very long and arduous, and the climbing is just utterly fantastic, getting progressively harder and more out there the higher up one gets! To climb a directtissima up the front edge has been a long-standing dream for me, and I was very lucky to have Pete on the other end of the rope.”

The pair left the car at 02.30am and started up the lower Steeple corners at 05.20am, climbing the first big pitch in the dark and the next two as dawn broke. They then continued up through the crux 5c pitch of Haystack.

“Pete dispatched this very smoothly despite a slip at the start of the difficulties (rather than lower down he just hopped straight back on),” Guy explained. “We split this pitch (Pete had downloaded all his kit) and then we stepped left before the end of the ramp onto a commodious ledge and belay.  We didn’t have a guidebook and couldn’t remember where Haystack went, and with the clock ticking it all began to get rather exciting!  With no choice but to forge on, Pete opened a new hard pitch straight up then slightly left, eventually joining Citadel where this goes right to below the headwall.

Then it was my big lead.  Despite cramping biceps and only a couple of hours light left, I managed to drag myself up the penultimate pitch of Spire before Pete dispatched the last 5b crack of Steeple – just in time for the darkness to envelope us.”

Guy and Pete have yet to grade Stone Temple Pilots, although Guy has made the following statement.

“Both Pete and I feel strongly that there is considerable over-grading surrounding today’s trendy, short routes.  I’ve climbed quite over two dozen grade VIII’s and IX’s now – including others as well as my own – and most of these I’m fairly sure I could have led all the pitches if push came to shove.  This route however (and The Steeple for that matter) are in a different ball park altogether; there’s just no way on earth I could conceive of leading it from bottom to top [by myself].  So does that make it grade X?  In my opinion it doesn’t – but other route grades would need to come down.  If that’s not going to happen then maybe grade X it should be…

…Whatever the grade, it’s kind of irrelevant.  The Stone has some of the most inspiring and challenging winter climbing this great country has to offer.  For a well-balanced and keen team there’s probably nothing anywhere else to compare!”

One Response to Stone Temple Pilots