The View From The Other Side 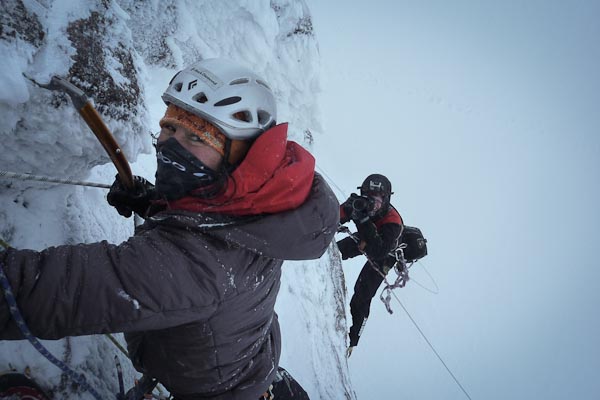 Ines Papert climbing Happy Tyroleans (IX,9) in the Northern Corries with Hans Hornberger wielding his camera in the background. This post celebrates the view from the other side of the lens - the unsung world of the mountain photographer. (Photo Charly Fritzer)

When Ines Papert and Charly Fritzer visited Scotland last February they were accompanied by German photographer Hans Hornberger. Hans has just compiled a brief video that captures some of the highlights of the trip including Charly making the second ascent of To Those Who Wait on Ben Nevis.

It is all too easy to forget the hard work and skill of photographers require to produce films like this, so I asked Hans what inspired him to take photos of Scottish winter climbing.

“A couple of years ago I saw a photo of a Scottish climber who got really scared in the middle of a steep wall totally covered with rime. Everything was just white and you could see the pain in his eyes from the snow crystals and the wind blowing in his face. I don’t know why, but I thought that this was so beautiful and from that moment I dreamed of climbing such a route one day.

In February 2010 my dream became true. I joined Ines Papert to meet Ian Parnell in Scotland with two other friends from Quebec, Audrey Gariepy and Matt Audibert. In ten days we had only two days with just a little bit of rain and snow. For all of the others the sun shone and all the routes were in perfect condition. Many people we met said that this wasn’t ‘Scotland’ – we were so lucky!

One year later Ines, Charly Fritzer and I came back to get to know the real ‘Scotland’. In two weeks there wasn’t one single day without rain, snow or very strong wind.

On our last day, the weather forecast predicted winds up to 200km/h and we still had to pick up our backpacks from the base of Coire an Lochain Northern Corries. Luckily it wasn’t that bad, and all I can say about climbing and working as a photographer in Scotland is that it is very special and unique. It’s just great.

I really love my cameras but I also enjoy seeing them fighting with the ice and cold. They did a great job and I had no problems at all. The only thing I regret is the short time you have in such conditions. I wish I would have had more time to do more complex compositions and getting into the right position and angle. But it’s hard in this cold to tell the climbers to stay at one point for a couple of minutes because you want to fix another rope. So it’s always a bit of a compromise.

What I like the most of Scottish Climbing is the strong ethic not to use bolts or leaving anything in the wall. It is a very clean way to climb and I wish we could have this ethic in Europe. To many routes get bolted here.

I hope we come back for another great winter climbing road trip next year.

Hans’ evocative photos of his 2010 Scottish winter visit can be seen on his website.

Simon Richardson is a passionate Scottish winter climber
View all posts by Simon Richardson →
This entry was posted in Commentary and tagged Hans Hornberger. Bookmark the permalink.