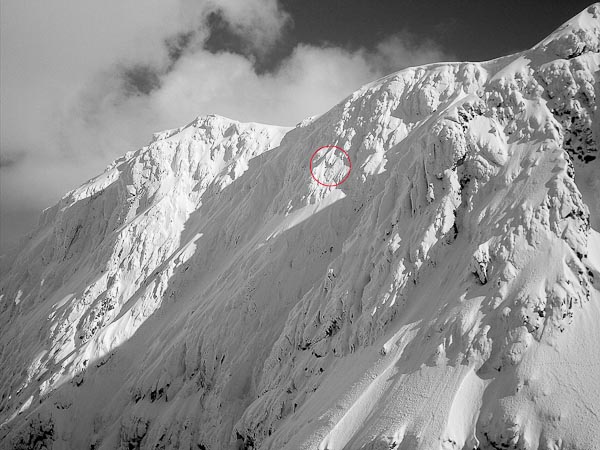 Brian Davison (circled) crossing the upper part of the Orion Face and nearing the finish of the Girdle Traverse (V,4) of Ben Nevis. The route was climbed right to left (see footsteps across the snow slope lower right), and at 4000m long it is the longest winter route in the British Isles after the Cuillin Ridge Traverse. (The other major Scottish winter girdles – Tom Patey’s Crab Crawl (IV,4) on Creag Meagaidh, and Martin Moran’s Das Rheingold (V,4) on Beinn Bhan, are 2400m and 2800m in length respectively). The Girdle Traverse of Ben Nevis was the second of Davison’s girdle traverses that make up the Trilogy Traverse of Scafell, Ben Nevis and Snowdon. (Photo Jason Wood)

The first snows arriving on the Scottish hills last week reminded me of a recent conversation I had with Brian Davison. Brian is probably best known for the first winter ascent of Mort on Lochnagar. When he climbed it with Andy Nisbet in 2000, it was one of the first Grade IXs to be climbed in Scotland, and it is still unrepeated. But not only is Brian an exceptional winter mountaineer, he is also an outstanding all-round climber and endurance athlete, although many of Brian’s achievements go unnoticed by the majority of climbers.

Brian was recently back from a trip to Jebel Misht in Oman where he had climbed a new 3000m E4. (Yes, I do mean a three thousand metre-long route!) The pillar was first climbed by a French party over a number of weeks with helicopter support, but Brian and his partner climbed their new route in a single day. Whilst my mind was boggling over this, Brian then talked about climbing all the Lakes Classic Rock routes, unsupported and on foot, in a day. I can’t recall the exact the details, but sixteen routes and approximately 42 miles running, is a big day out by anyone’s standards.

These feats reminded me of an email Brian sent to Steve Ashworth and I in February 2010 about the completion of the Trilogy Traverse. This is another of Brian’s achievements that has slipped under the radar screen, so I thought I’d take the opportunity to highlight it on Scottishwinter.com

“As my partners on the girdle traverses of Ben Nevis and Scafell I thought I’d let you know that yesterday I did a girdle traverse the Trinity Buttress on Snowdon. After completing the traverse of the Ben I realised there was only Snowdon to do and I had completed the set.

As far as I can tell from the guide and other Welsh climbing info it hasn’t had a winter ascent either. That could be due to the fact there isn’t a great natural line and traverses are never high on climbers tick lists.

The route wasn’t as good as the other two and seemed to involve a lot of climbing in and out of gullies as well as up and down to try and find the right way. With 6 inches of unconsolidated powered snow on the ledges conditions weren’t as friendly as they could have been but at least the turf was frozen. I’d give it IV and say you have to be confident at climbing up and down at grade III, but to be honest at that grade you could climb anywhere on the entire cliff.”

Any takers out there for a single season Trilogy Traverse?