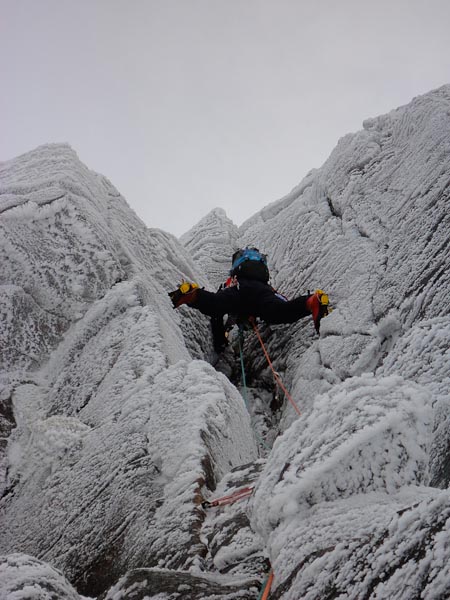 Sean Peatfield in action yesterday, on the corner pitch of The Message (IV,6) on the Mess of Pottage in Core an t-Sneachda. Three days of cold winds and snowy weather, and the ever-reliable Northern Corries were well rimed providing good winter sport. (Photo Iain Munro)

The wind swung around to the North on Monday and winter began on the Scottish hills with the first significant snowfalls of the season. On Tuesday October 18, Ledge Route (II) on Ben Nevis was climbed and Alan Halewood made a solo ascent of Tower Ridge (IV,3).

Alan has made early season solo ascents of Tower ridge something of a speciality in recent years, but the description of Tuesday’s ascent on his blog sounds a little more exciting than normal: “The Little Tower passed in a slippery, thrutchy blur, the snow useless and ice thawing and often detaching from the rock when given a quick scrape… The climbing up the side of The Great Tower on icy rimed up rock felt like proper winter… sketchy, slippery nervy with a spindrift of hail patting my helmet.”

On Wednesday, several parties visited the Northern Corries and Joris Volmer and Nathan White ticked the modern classic Hoarmaster (V,6) in Coire an Lochain. The weather quietened down for Thursday morning and more teams were out to take advantage of the overnight frost. Iain Munro and Sean Peatfield climbed The Message (IV,6) in Coire an t-Sneachda, and across in Coire an Lochain, Savage Slit (V,6) saw an ascent by James Edwards and Ross Jones.

All these routes were a race against time as a warm front was racing in from the West. By Thursday evening the crags had stripped, but there can be no doubt – the new season has definitely begun!