Posted on February 1, 2020 by Simon Richardson 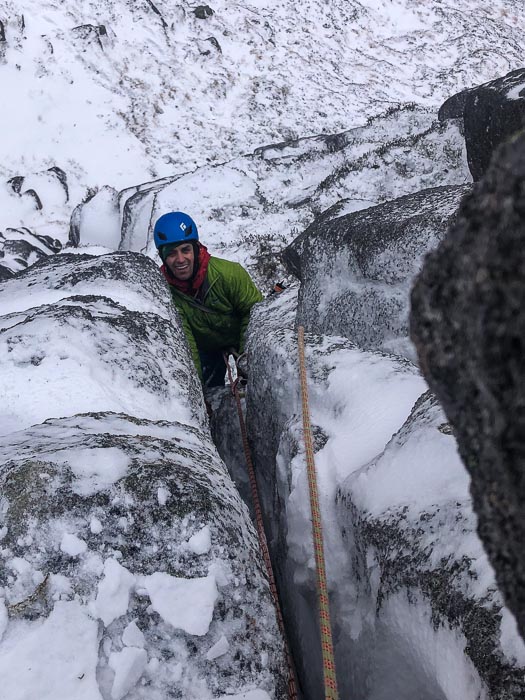 Graeme Gatherer pulling through the overhanging groove at the top of Chocks Away (V,7) on Creagan Cha-no. Over 40 new routes have been added to the cliff since publication of the SMC’s Mini Guide last winter and work on a revised edition is underway. (Photo Steve Elliott)

It’s been a tough January in the Scottish mountains with almost non-stop winds and long periods of thaw. Conditions on the mountains have changed day by day and have often been completely different from east to west. Here is a brief summary of new route activity together with a notable early repeat:

January 15: Nathan Adam and Iain Howie climb Could Be Worse (V,4) on the right flank of Black Buttress, Mullach nan Coirean. The relationship of this innovative ascent with Will Rowland’s routes from the winters of 2016 and 2017 is currently uncertain, but will be resolved for the 2020 SMC Journal.

January 18: First ascent of The Arc of Profanity (VI,8) on Creagan Cha-no.

January 18: Malcolm Bass and Nick Clement make an early repeat of Archangel (VII,7) on Creag Coire na Ciste on Ben Nevis. They meet a pair on the summit plateau who have just climbed Point Five Gully (V,5), apparently in good condition! These two climbs are amongst the finest ascents of the month.

Congratulations to everyone who succeeded on a Scottish winter climb, old or new, in January. If I have missed something from the above list, please let me know. Fingers crossed for a better February in the Scottish Highlands!