The Arc of Profanity 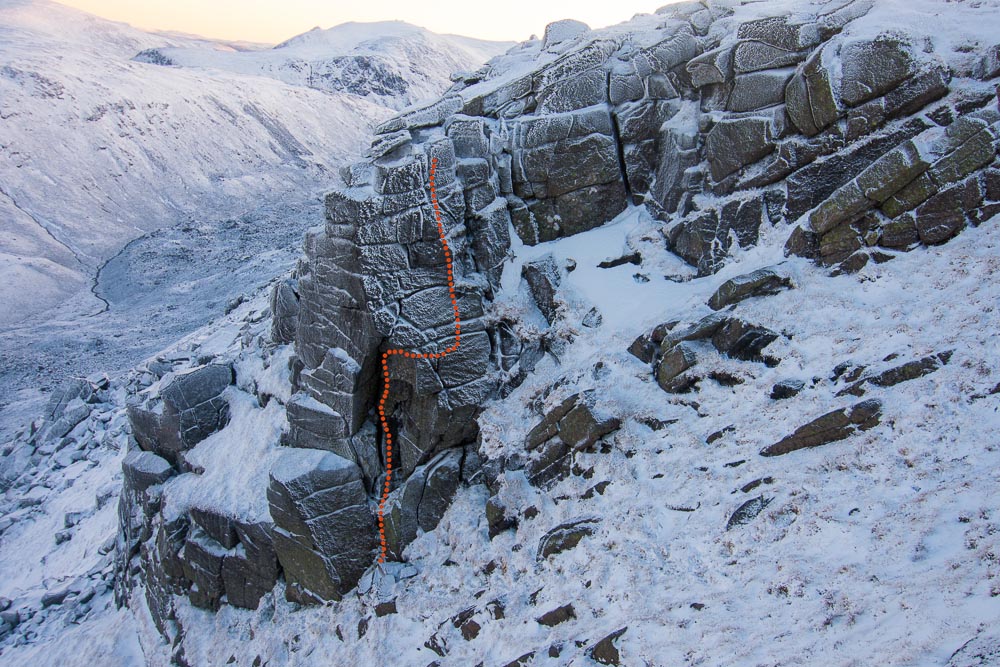 The line of The Arc of Profanity (VI,8) on the Left-Hand-Buttress of Creagan Cha-no on Cairn Gorm. The route saw its first ascent by Dave Brookes and Jules Harris on Saturday. Two months earlier they made the second ascent of The Edge of Profanity (V,7) that takes the crack-line up the vertical wall to the left. (Archive Photo Dave Brookes)

While making the second ascent of The Edge of Profanity in November, Dave Brookes and Jules Harris noted that there was further new route potential on the Left-Hand Buttress of Creagan Cha-no on Cairn Gorm. On January 18 they returned to the cliff and made the first ascent of an excellent technical test-piece called The Arc of Profanity (VI,8).

“To the right of Edge of Profanity there is a vertical curving crack that becomes overhanging,” Dave told me. “It leads right into a small roof and then out onto the buttress above.

Last Saturday conditions at Creagan Cha-No were at long last properly frozen again. Jules and I headed back to Left-Hand Buttress with the aim of climbing this line. It took three attempts before I worked out the moves to get through the roof clean – the first two attempts involved various whippers.

From the foot of the route the whole thing looks a bit unlikely but it’s a fantastic route and it’s all there. Initially the crack provides some good gear and solid hooks. The final moves through the roof and out onto the buttress above are hard and would be a tricky on-sight. I’m undecided on the grade although somewhere around VI,7 or VI,8. I propose naming the route The Arc of Profanity.”