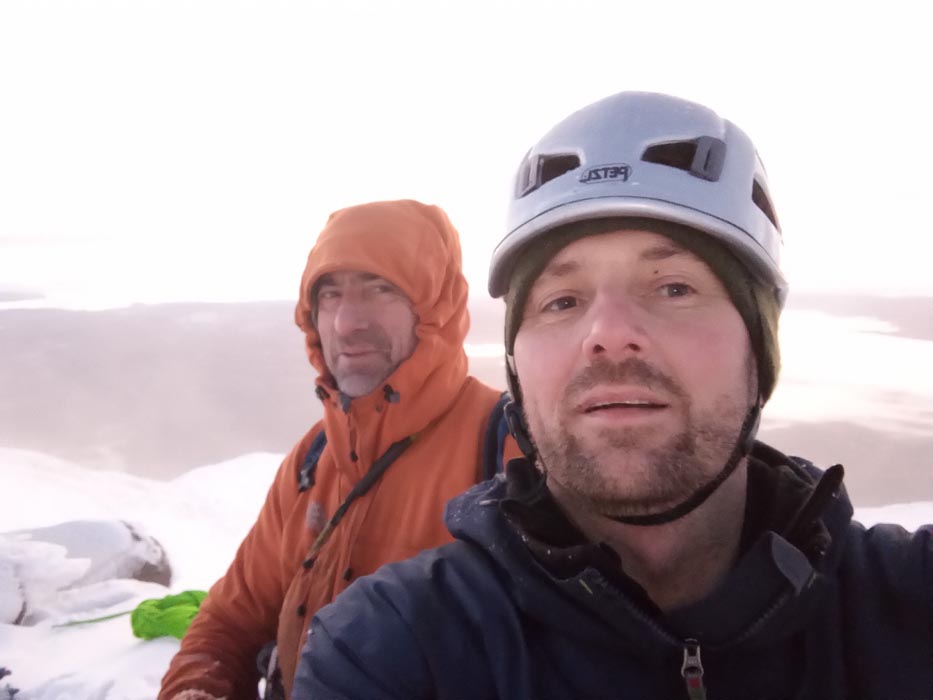 Robin Clothier and Stuart MacFarlane on the summit ridge of Ben Cruachan after the first ascent of One of Nine (IV,5) on Noe Buttress earlier this season. The active duo added another new route called Double OO (IV,4) to the buttress last week. (Photo Stuart MacFarlane)

It’s been a very lean January so far, but following their first ascent of One of Nine (IV,5) on Ben Cruachan in November, Southern Highlands pioneers Stuart MacFarlane and Robin Clothier added another new route to Noe Buttress on January 10. Stuart takes up the story:

“After studying forecasts and reading reports, where could we find some climbing before weather turned poor again last weekend? Unfortunately, my suggestion of Ben Cruachan, didn’t fill either of us with enthusiasm over that walk in!

Signs of winter started to appear below reservoir, more so between there and col, and fresh snow and hoar started to appear on the rocks leading up to summit. Even the descent down Easy Gully was neve, much more pleasant than usual frozen scree!

Robin lead Tainted Elixir (V,6), which was well frozen and lightly hoared by the cloud in lee of the prevailing wind. When we descended back down again, surprised to see another party, gearing up beneath it.

I’d climbed the original route on Noe Buttress twice previously, but there is a parallel corner just to the left. This resulted in Double OO (IV,4), 40m of new ground, crossing One of Nine before joining existing routes leading to easy ground above.

We still had time for another route, but with a strengthening Southerly gale, we opted to descend into the onset thaw …and then that walk out!”