Posted on December 16, 2019 by Simon Richardson 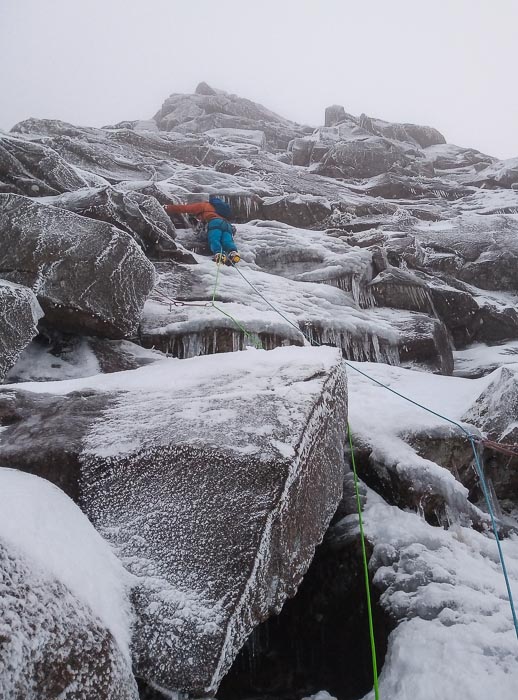 Robin Clothier making the first ascent of One of Nine (IV,5) on the front face of Noe Buttress on Ben Cruachan. The route starts up rarely iced granite slabs and the name is play on a team age of 109. (Photo Stuart McFarlane)

Stuart McFarlane and Robin Clothier added a good new route to Coire Chat on Ben Cruachan on November 13. One of Nine starts up the icy slabs of Hats Off on the front face of Noe Buttress and continues up and left where that route trends right on the first pitch.

“Robin and I headed back up Cruachan, hoping things had remained frozen before the snow arrived,” Stuart told me. “More snow than expected greeted us above the dam so a longer approach ensued! But the sky was blue and it was calm, and after we had geared up and descended, we found crag to be very icy. From base of Noe Buttress, ice smears continued down slabs above, something I’d never witnessed before.”

Iain Small and Jason Walker climbed these icy slabs when the made the first ascent of Hats Off (V,6) in December 2004, but Stuart is correct that these slabs are rarely iced. When Chris Cartwright was developing the cliff during the winter of 2003/4 we often went to have a look, but we never saw ice thick enough to climb.

It has been a very wet autumn, so as long as it stays cold, we are well set up for an icy winter. Fingers crossed!