The Edge of Profanity – Second Ascent

Posted on December 4, 2019 by Simon Richardson 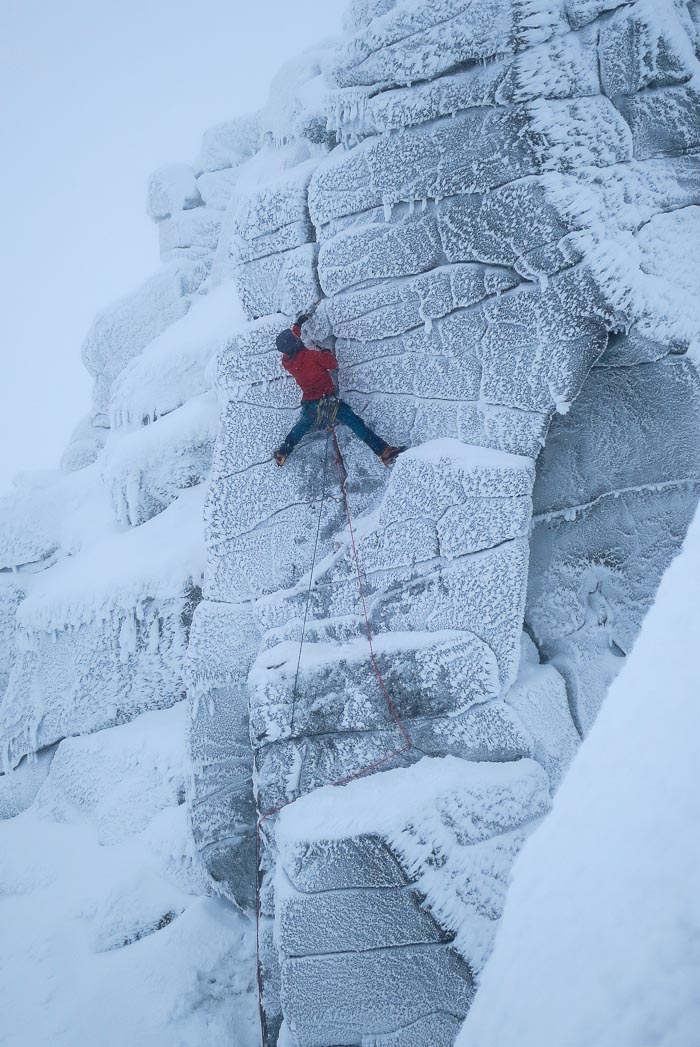 On November 30, Dave Brookes and Jules Harris put to bed a well-known problem on Creagan Cha-no when they made the first free ascent of The Edge of Profanity. This short, but deceptively steep route, was first climbed early last season.

“A couple of weeks ago, Jules and I were at the southern end of Creagan Cha-no,” Dave told me. “I saw a fine natural line going up the face of a buttress with what appeared to be a wide crack in the top half – I hadn’t got a clue what it was but it did look great, so I had a go at climbing it. Everything went well until the last tricky moves at the top at which point I fell off.  After a few more falls I gave up, but back in the van some quick research revealed it to be The Edge of Profanity, which was still awaiting a clean winter ascent.

Last Saturday Jules and I returned. I managed to climb it clean, ground up, first time – there’s nothing like a good rest between attempts! It was an awesome day to be out in the mountains and the route was a proper workout!”

Saturday was a busy day across the Northern Cairngorms with many teams climbing the classic routes in the Northern Corries. Cha-no was well frequented too, and Roger Webb and I added a new IV,4 on the right flank of Blood Buttress. A Special Sort of Idiot (Roger was referring to me as I made him come down and reclimb the top pitch when he strayed onto an existing route) takes the grooves, wall and arête between Captain Fairweather and the depression of Flood Warning.

Steve Elliot and Graeme Gatherer took good advantage of the perfect day when they made an early repeat of Cherokee Chimney (V,6) on Garbh Choire Mor on Braeriach. They were not the only team to take advantage of the excellent mountain travel conditions that day and arrived at the abseil point at the top of Great Gully just before another team of three. Queuing on Braeriach – now that must be a first!