The Edge of Profanity 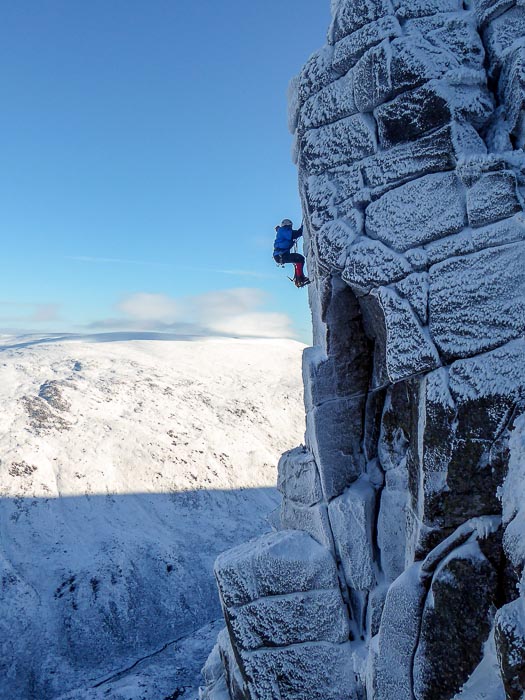 Martin Hind following the The Edge of Profanity (V,7) on Creagan Cha-no on Cairn Gorm during the first ascent. Martin has given up with axe torques at this point, and is hand jamming the flared offwidth – note the dangling ice tool by his feet. (Photo Roger Webb)

Finding good early season winter climbing conditions can be a tricky business. The winter weather that started on the night of October 26 came in on strong north-westerlies depositing deep snow on eastern aspects and insulating the turf. The well-known early season cliffs in the Northern Corries of Cairn Gorm have a helpful north-west facing aspect, and on October 28 the Mess of Pottage saw ascents of Sharks Fin Soup, Honeypot and The Message. Over in Coire an Lochain, the ever popular Savage Slit and Western Route also saw ascents.

Roger Webb, Martin Hind and I visited Creagan Cha-no on the eastern side of Cairn Gorm on October 28. We soon realized that this east-facing crag was a poor choice. Not only was the turf buried under windblown snow and largely unfrozen, but the cliff was catching the full force of the late autumn sun.

Fortunately I knew of an ‘unclimbed’ line of grooves and cracks on the north-facing right flank of Left Buttress, and sure enough this was in the shade and nicely hoared up too. I say ‘unclimbed’ because below the crux section on the final impending wall we found a wire nut and screwgate karabiner, which we presume had been used for retreat. The climbing was awkward and sustained up to this point, but above, the crack opened up into a flared offwidth. It was only after repeated falls that I managed to stack a couple of large hexes which gave me the confidence to squirm upwards to a tiny patch of exposed frozen turf that enabled a scary top out onto a blank slab. Martin, who is far more naturally gifted climber than I, followed with style and elegance. The falls and ensuing rest point mean that a clean ascent awaits, but The Edge of Profanity (V,7) certainly packed a punch for its short length.

7 Responses to The Edge of Profanity