Posted on November 14, 2018 by Simon Richardson 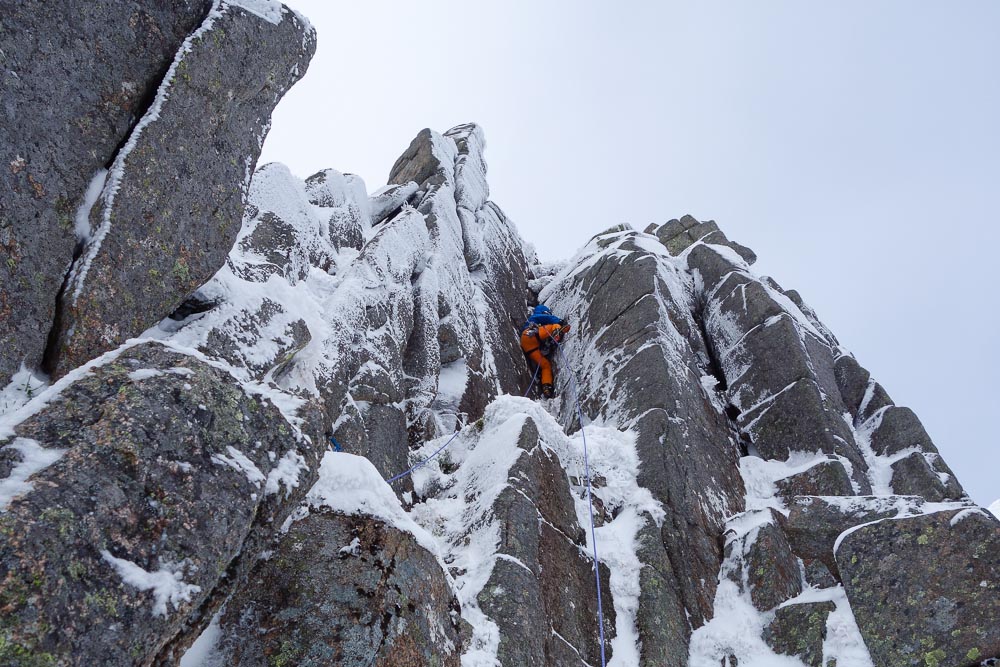 Roger Webb on the first ascent of Ghost (IV,7) on the newly named sector Grooved Pinnacle Buttress that lies to the right of Blood Buttress on Creagan Cha-no. This route was one of four new routes added to this part of the cliff during the October cold snap. (Photo Simon Richardson)

Today, the Scottish Mountaineering Club published a mini-guide to the popular and easily accessible Creagan Cha-no on the east side of Cairn Gorm. This is the first guidebook published for the cliff and includes all routes climbed until the start of the current season. Over 65 routes are described with grades ranging from II to VII and illustrated with eleven topos and a map.

The cost is £2.99 and all profits go to the Scottish Mountaineering Trust.

The guide has been has been selling like hot cakes, and within minutes of it coming on sale Alex Riley pointed out a small omission. On January 8 this year he climbed a Left-Hand Finish to Once Were Alpinists (III,6) with Caelan Barnes and Sam Palmer. “Rather than moving right at the overhang I moved left over the rib making a few hard mantelshelf moves up on breaks,” Alex told me. “Obviously the route gets a bit of comedy grade, but it felt much harder and bolder than expected, and moving left as I did it probably weighs in at V,7. It’s not a huge variation, but worth logging due to the quality of the climbing and the exposure… It’s a great finish, I was pretty gripped leading it!”

No doubt there will be a few other routes that have escaped inclusion, and many other new climbs will be climbed this season. So as usual, if you have any news about climbing on the cliff please get in touch so we can maintain the definitive record.