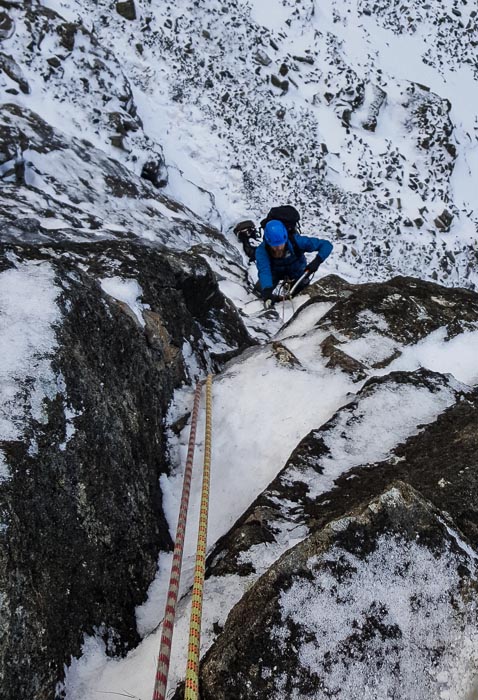 Stephan Wrede on the first ascent of Tour de Force (VI,6) on Sgurr Thearlaich on Skye. Unusually heavy October snowfalls brought high snowed-up rock routes into winter condition at several venues across the Highlands. Stephan is from Canada and this was his first experience of mixed climbing. (Photo Mike Lates @skyeguides)

Mike Lates and Stephan Wrede gave the new winter season a flying start on October 28 with a new route on The Cuillin. Tour de Force (VI,6) is situated on the Great Stone Shoot Face on Sgurr Thearlaich. The three-pitch route starts 10m right of BC Buttress and follows a series of corners and grooves guarded by brutal roof on the first pitch. The late October snows have brought several high and exposed cliffs into good winter climbing condition. The trick, as always in very early season, is to choose snowed-up rock routes rather than those that rely on frozen turf.

“It feels like Christmas has come early,” Mike told me. “The first two pitches had very steep cruxes that luckily yielded sinker placements (eventually). A total bonus was climbing in the sun on some properly good ice on the easier-angled third pitch. It was a busy day on the hill and some bold souls even appear to have been going for a fast Traverse wearing microspikes rather than crampons!”