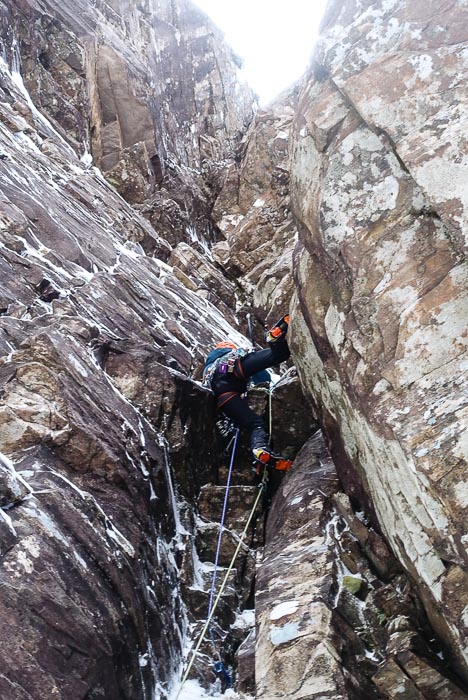 Ross Cowie on the first ascent of the KerPlunk Finish (VII,7) to Jenga on Sail Mhor in the Northern Highlands. This section of the mountain is notoriously loose and a few large blocks we trundled during the making of the route! (Photo Pete Davies)

On March 31, Pete Davies and Ross Cowie climbed Jenga (VI,7) on Sail Mhor in the Beinn Eighe massif and finished up KerPlunk (VII,7), a spectacular exit on the left wall.

The deeply-cut gully of Jenga has an exciting history and was first attempted by Brian Davison and Andy Nisbet in 1996. Unfortunately Brian dislodged a rock, which caused a stack of blocks to fall on top of him resulting in a helicopter rescue. Brian and Andy returned in March 2000 with Dave McGimpsey and Dave Wilkinson to complete the route, which sports an impressively steep finish.

“Jenga gully has a great ambience and its headwall forms an impressive hidden amphitheatre,” Pete told me. “KerPlunk is quite steep, but as it’s possible to bridge and back and foot much of the way, the climbing isn’t too difficult. Good hooks and, for us, very helpful snow ice conditions. There were some loose blocks in places that added an air of seriousness. We trundled the worst offenders when seconding but some suspect rock may remain. Probably one to avoid early season or if things don’t seem fully frozen. All in all, it sounds similar to Jenga in this respect, given Andy’s experience on that line!”